Previously the “Drag Queen Story Hour” in Port Richey, FL hosted by Pasco Pride was held inside of the Paperback Exchange Bookstore and was set to take place on the first Sunday of every month. After months of protesters gathering outside of the book store, the business owner Joan Hempsworth said:

“Due to the “safety of protesters on private property” and lease agreement and landlord circumstances beyond our control as the owners of The Paperback Exchange Bookstore and as presenters and as members of the of Pasco Pride 501-3C board we are being (in so many words of discouragement) “asked” to no longer host and to move the children’s portion of our beloved Drag Queen Story Hour #DQSH with Miss Stephanie Stuart and Mr. Vyn Suazion to a new location within our community.”

The Story Hour hosts compiled by switching their venue. Pasco Pride held the story time at a different but more common location for these types of events. This past Saturday’s reading, for the second time, was held inside of the New Port Richey Public Library. A few seemingly uninterested children and a bunch of adults gathered around “Miss” and Mister Pasco Pride 2018 to hear stories, listen to songs and blow bubbles. 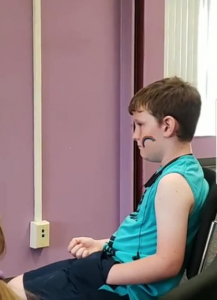 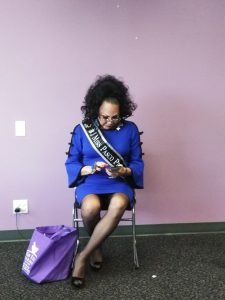 At one time, the kids parents dragged them to the front of the room to dance close to Mister Pasco Pride but most of the time the children just watched on with sour looks on their faces. Everyone sat mostly quiet while a biological male in a blue dress and women’s pantyhose read to them, asked for respect, then demanded to be called “Stephanie”.

A few concerned citizens sat in quietly on the event to observe what really happens inside of a Drag Queen Story Hour. They were greeted with intimidation and intolerance.

After the event was over, concerned citizens Deb Maxwell and Victor Mccleskey questioned the New Port Richey Youth Education Librarian, Jessica Meredith about their policies on pedophiles gaining access to children through the library. Below is what was recorded of Jessica Meredith’s interpretation of the policy on pedophiles being welcomed to host events for children at the New Port Richey Public Library.

Jessica Meredith: “This is a library Sir, free speech for everyone as long as you are respectful.”

Deb Maxwell; “Pedophiles. Can you say that again? So pedophiles can come here and entertain children?”

Jessica Meredith: “Everyone is allowed to come into the library. Third party groups are allowed” Jessica continued to tell Victor Mccleskey “I will be happy to show you our meeting room policy, we literally can’t be…. [inaudible]”

Deb Maxwell: “So pedophiles are more than welcomed in the New Port Richey Library to entertain children?”

Jessica Meredith: “Everyone is welcomed into the New Port Richey Library, period. I hope you are following the laws.”