Folks all across the country were outraged by the Drag Queen Story Hour reading that was set to take place inside of the Morgantown Public Library System on November 16th, 2019 at 10 a.m in Morgantown, West Virginia. Tomorrow “Dimitria Blackwell”, the biological male in this photo, was scheduled to read to innocent children who were going to be brought to the library by their own parents. After more then 10 days of upset Christians from all over the nation who were calling, emailing and leaving reviews on the library Facebook page to expressing their disgust with the event, their voices were finally heard- and not a day too late! 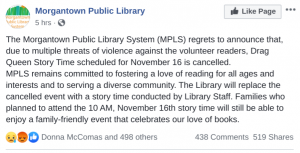 According to a post made by the library on their Facebook page just a few hours ago, the DQSH reading for tomorrow is now cancelled and will instead be replaced with a family-friendly event. The reasoning behind the cancellation of the dirty reading is still up for debate. In the statement posted to the library’s social media page the library claims to have cancelled the event due to “multiple threats of violence against the volunteer readers”. In that statement is also what appears to be an admittance of knowledge about the level of inappropriateness that came along with Drag Queen Story Hour- which requires men to wear women’s underwear, skirts and ladies shoes while reading books about gender confusion, child sexualization and Satanism to a young audience who is hardly old enough to use a toilet without supervision. The library chose replace the reading with a family-friendly event that truly expresses what a public library is all about.

When a phone call was made to the Morgantown Police Department just 3 hours after the MPLS’s public cancellation to ask about the threats that were being received, the police department stated that there were no actual reports that they are aware of. Surely if violent threats were being made, wouldn’t someone contact their local police department to tell them of the danger? Wouldn’t one report threats of violence so that protection can be provided and justice can be served for such heinous threats?

Perhaps it is just more logical to believe that the decision was made to cancel the abominable event after word started getting around that the “Drag Queen” who was scheduled to read at the event “Dimitria Blackwell” is actually Paul Liller, the former Baltimore Pride coordinator and deputy director and acting executive director of the Gay, Lesbian, Bisexual and Transgender Community Center of Baltimore and Central Maryland, was been charged with theft and theft-scheme.

It seems that this was exactly what the library needed to cancel with event and meet the desires of the community’s standards without having to face the wrath of the angry mob that they would be forced to encounter. However, is does not look good since it seems to many that the public library could be fabricating a tale of “violent threats” to justify terminating this wicked event. It looks as if the library is shifting the blame on those who drew attention to the inappropriateness in the first place, rather then outright confessing the “Drag Queen Story Hour” event is no where near “family friendly”.

Disclaimer: It’s okay MPLS, Christians are more then willing to take the heat and the blame for the cancellation of this event- even under what could possibly be false pretenses . Christians will tolerate being called bigoted, judgmental, men-in-panty-haters- if it means sparing even one child from this debauchery.

An update will be forthcoming, ChristianJournal will be filing a FOIA request for more clarification behind the statement the library made today, as the library was closed during the time this article was published.