Downtown Eastside Women’s Center in Vancouver, BC was established in 1978 to provide a safe place for women and children in the Downtown Eastside. DEWC claims to provide practical support, basic necessities and hot nutritious meals to over 500 women and children every day according to their website. Women and children come to DEWC to escape domestic violence, homelessness, addiction and poverty. They depend on facilities like this to keep them safe and get them back on their feet after a domestic dispute has displaced them. Often, the last thing a woman who was a victim of domestic violence wants to see is a man, after suffering abuse at the hands of one.

A social media post surfaced that drew attention to the shelter, but not for their good works. Over the last few days it has been brought to public attention that DEWC has now opened their doors to the very thing that some of these abused women fear the most, a man. A man who dresses as a woman and is currently taking hormone therapy pills is a refugee at the women’s shelter. It is reported that Tyler Porter, a self-identified male-to-female transgender, began throwing his hormone therapy pills at female resident who raised concerns about him being housed at the shelter.

The filthy social media posts that came from Porter while inside of the Downtown Eastside Women’s Center are downright disturbing and prove exactly why the rightful resident, who is actually a female, had every right to be concerned. 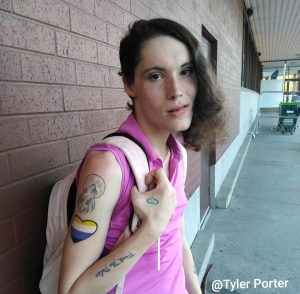 “Despite how small they still are it makes me happy when I see a cis woman with even smaller t*** Like ha! Take that mother nature.

Subsequently the Downtown Eastside Women’s Center issued a Facebook post in response to the bad fame Porter brought their way. They have stated that they are also a safe house for the mentally ill. Thank you DEWC for confirming what we already know; transgenderism is a mental illness and not a free pass for perversion. 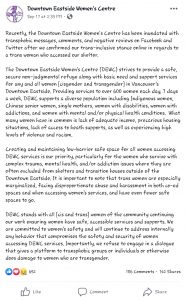 This needs to be shared everywhere.
This is sick what that man did!

DISGUSTING BEHAVIOR SHOULD NOT BE CONSIDERED “MENTAL ILLNESS”

If that THING is a transgender than Imma UNICORN!