The Christian Journal
Home The Church God Sent A Massive Message During the Texas Tornado Did You See... 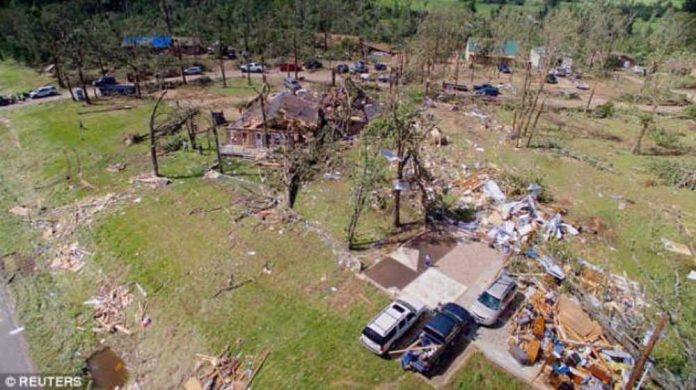 Let us never forget the grace of the Almighty, because of His grace we are still here. Because of His grace during the Texas tornado a small church in Dallas was demolished, totally, but the forty-five parishioners inside, unharmed.

God works in mysterious ways and when destruction came to a Texas Catholic Church, members of the Church miraculously survived inside.

The destruction but the Grace
1 of 5

The members of the Church were praying inside the hallway as the Tornado tore to shreds the Catholic Church.

About 45 people — including toddlers and students — were at the parish hall of St. John the Evangelist Catholic Church in Emory, a town outside of Dallas, Texas, when they received warning that a tornado was approaching.

They didn’t run, they decided to take refuge inside the church hallway.

“About 30 seconds after we went into the hallway, it hit,” said Monica Hughes, a youth minister who was among those gathered at the hall to honor high school graduates.

Hughes told reporters that she and her husband held on tight to double doors to keep them shut.

“We could see the beams bending and the aluminum roof being ripped away,” she said.

“Everybody dropped to the floor and protected one another. As soon as the worst was over, we began to sing to keep the kids calm.”

While the walls shook and the beams bent – they prayed, and God delivered.

“Everyone was perfectly calm and felt like it was going to be OK,” said Hughes, who added they monitored the storm and stayed in place for nearly two hours before EMS arrived.

Miraculously, the forty-five people inside survived.

The Texas incident is a physical representation of deliverance. When the walls come tumbling down, the storm is all around, and your stuck in a hallway, remember praise the Lord in that hallway, thank God for that hallway, until the door opens.