In Orlando, Florida, in June 2016, America’s deadliest mass shooting, before the 2017 Las Vegas shooting, had occurred at a gay nightclub called Pulse. The incident left forty-nine dead and dozens wounded.

However, a man named Luis Javier Ruiz survived the shooting and just two years after the shooting, Mr. Ruiz posted to Facebook stating that he has found Christ and is no longer a homosexual.

Scripture clearly describes that each human being will face struggles and temptations in this life, Mr. Ruiz described his challenges by saying that the enemy had its grip upon him and that God pulled him from the temptations;

“The enemy had its grip and now God has taken me from that moment and has given me Christ Jesus I’ve grown to know his love in a deeper level. In this picture 2 of out of 49 my close friend on right and in back of me are no longer with us they lost there life that night.”

The Pulse nightclub shooting took place almost exactly two years ago, which claimed forty-nine lives in the mass casualty event in Orlando, Florida. Mr. Ruiz was one of the fifty-eight that were injured. The attack was the deadliest single-gunman mass shooting in United States history until the 2017 Las Vegas shooting. 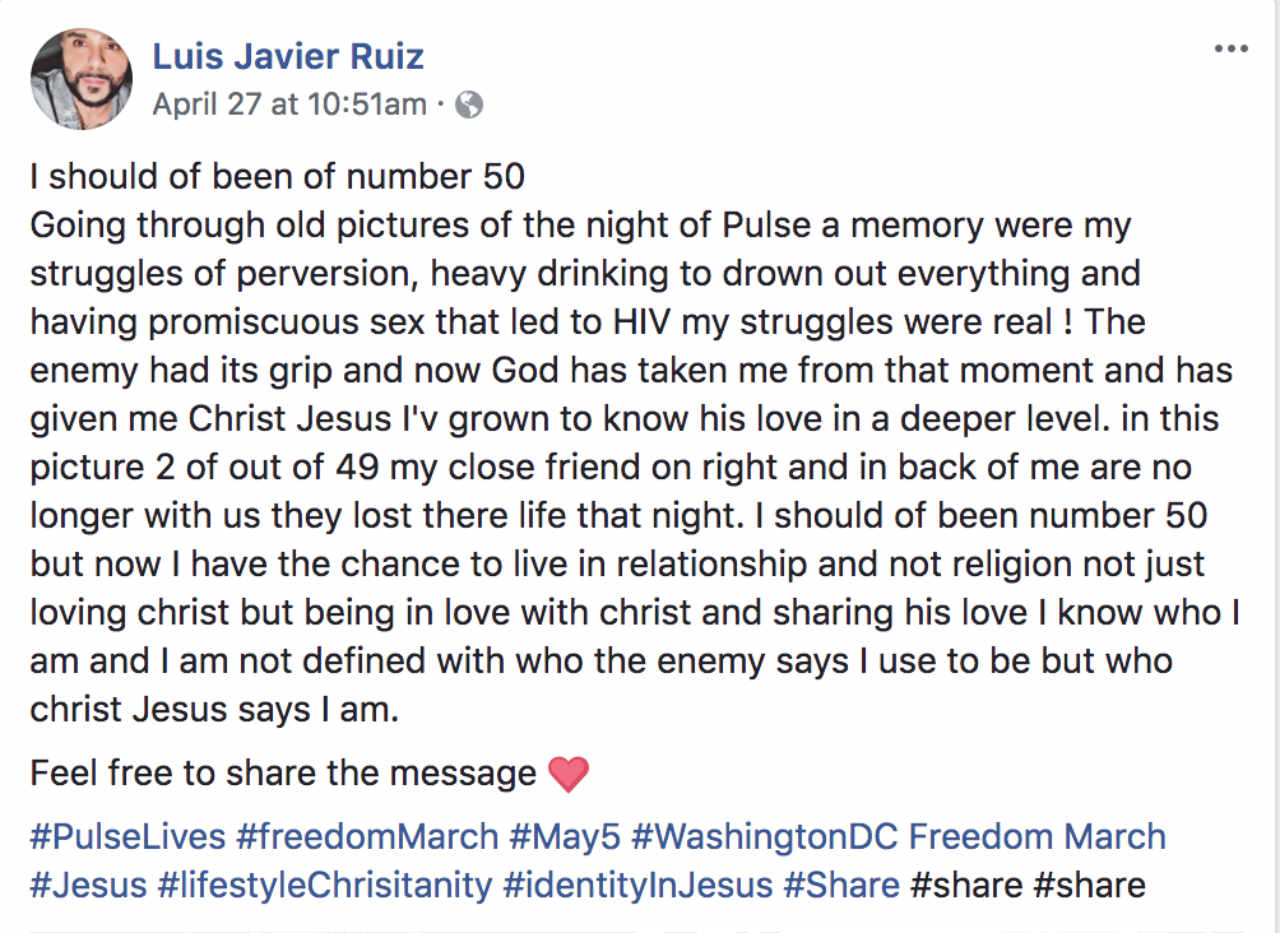 Mr. Ruiz is said to be attending the Freedom March which will be taking place on May 5th, 2018 in Washington. The event is organized by the Voice of the Voiceless, a group which is determined to give a voice to those who have overcome homosexuality, and their mission is, as per their website; “to defend the rights of former homosexuals, individuals with unwanted same-sex attraction, and their families.” According to their website;

It’s time to stand up, speak out, and unite! For too long former homosexuals, individuals who experience unwanted same-sex attraction (SSA), and their families have been marginalized and misrepresented. We have suffered enough abuse in the media who sing praises to the lesbian, gay, bisexual, and transgender (LGBT) community, and condemn former homosexuals and those who experience unwanted SSA. Sadly, key activists in the LGBT community have been responsible for defamation, lies, and bigotry towards us. No matter how loving and respectful we are, our unwanted SSA and stories of sexual orientation change appear as a constant threat to them… Voice of the Voiceless