The dark ages, that name was not created for just any reason, it was one of the most evil times in history. Within the dark ages the Crusades occurred, and now it is repeating right before our very eyes. The bloodiest wars, the starvation, the death, the plagues, the murders, the slayings, all because of one problem; the invasion.

The Crusades were military campaigns sanctioned by the Catholic Church in the Middle Ages. Pope Urban II authorized the First Crusade in 1095 with the goal of restoring European access to the Holy Land, and an intermittent 200-year struggle ensued. Urban was also seeking to reunite the Catholic Church under his leadership by militarily supporting Emperor Alexios I. After centuries of competitive co-existence with the Arabs following the initial Muslim conquests, the Byzantine Empire had been defeated by the Turks in 1071 at the Battle of Manzikert. As a result, the Byzantines lost the fertile coastal area of Anatolia and were forced into competition with Turks migrating westward.[1] Source

History is repeating right before our very eyes with greedy, murdering refugees.

It is not about the refugees. It is not about saving people, helping people; none of that. This is a damn invasion into Europe to facilitate the collapse of Europe, just like in the days of the Crusades. Below is a tweet from a Dutch Journalist, who purchased a Syrian Passport: “First proof that you can buy false Syriepaspoort: for $ 825 I bought in N-Syria Passport + ID for Mark Rutte.” 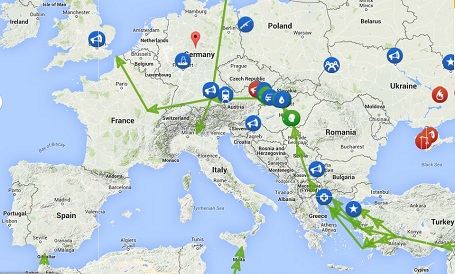 Syrian Passports are being produced in enormous quantities, and all of them are en route to Europe.

Somebody better wake up.

The “refugees” are coming in droves and there is no stopping it. However, there is something far worse brewing. ISIS militants are hiding among the refugees waiting to strike.

As the migrant-train standoff entered its second day in Hungary, with thousands of mostly Syrian refugees seeking passage to Germany, it’s time the West recognized this shift in Muslim populations for what it is, say American activists who have been warning of a “fifth column” for years.

Author Robert Spencer wrote Sept. 4 in Front Page Magazine, “This is no longer just a ‘refugee crisis.’ This is a hijrah.”

Hijrah is the Islamic doctrine of migration, which is a form of stealth jihad.

“To emigrate in the cause of Allah – that is, to move to a new land in order to bring Islam there, is considered in Islam to be a highly meritorious act,” Spencer wrote. He cited the following Quranic text:

“And whoever emigrates for the cause of Allah will find on the earth many locations and abundance,” says the Quran. “And whoever leaves his home as an emigrant to Allah and His Messenger and then death overtakes him, his reward has already become incumbent upon Allah. And Allah is ever Forgiving and Merciful” (Quran 4:100).

And now, looking at Europe and America, a migration invasion of a much greater magnitude is underway.

Evidence of that invasion came in February when an ISIS operative confirmed what many already suspected – the Islamic State is using the refugee crisis to form a fifth column of Muslim fighters inside Western nations.

The war that is coming to the West is literally history repeating itself. After a quick history lesson, lets fast forward to now and cover some of the other information that has been recently discovered and discussed.

First is the video by Fox News, which is an entire hour long video of a panel going back and forth fighting about the difference between radicalized Muslims and “normal” Muslims. However, if you have paid attention thus far then the lesson learned is that literally any Muslim who reads the Quran, and follows the book, is radicalized because of the teachings in the Quran. Which according to Bridgette in the video below roughly 15-25% of all muslims are radicalized.

There are roughly 1.6 billion muslims on the planet at this moment, and again according to Bridgette the statistics state that roughly 15-25% of all muslims are radicalized, which amounts to roughly 300,000,000 million muslims. Again according to her, that if those “radicalized” muslims are not killed and dealt with then they will blow the entire world to smithereens.

So what happens when or if the world does finally take a stand and begin to purge the world of this evil? More muslims will stand up. Which means that the numbers of dead are going to sky rocket because the estimates are only one sided here. The estimates are not taking a war into account.