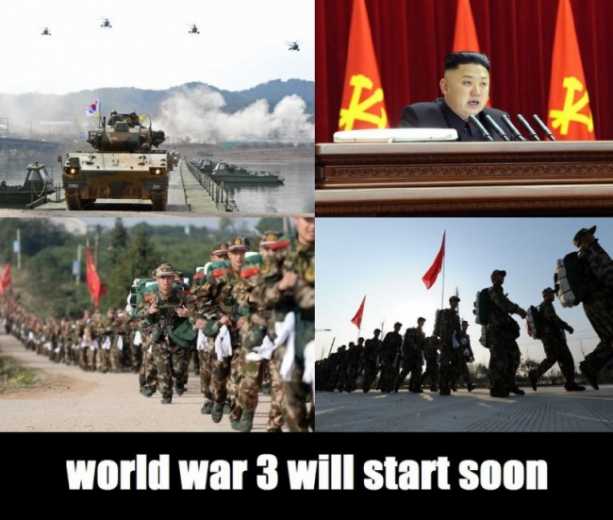 Recently, North Korea threatened to conduct a “pre-emptive nuclear strike of justice” on the American homeland. North Korea demands that the U.S. imperialists, and S. Korean puppet forces exercise, Key Resolve and Foal Eagle, be halted. These are annual drills and ever single year, a threat is made. 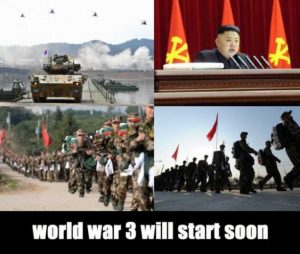 Around the same time every year North Korea makes outlandish threats against the US or as they call it the U.S. imperialists, and S. Korean puppet forces. One factor of Kim Jung Un’s regime is control. Through such regime the essence of fear runs high among Koreans, which is meant to subdue the populace into submission and slavery. However, isn’t the US doing the same thing through fear mongering campaigns using police brutality to keep our populace at bay? All while claiming outlandish warmongering campaigns around the world? The US has hundreds of military bases around the world, spends billions of dollars on war, and is a terrifying force to whomever they deliver “democracy.” Both sides of this are guilty of the same propaganda push, using the narrative that one is good and the other is evil. When a broad spectrum approach is taken, it is well beyond evident that both sides are conducting the same fear based campaigns, with the same goals in mind; subduing the populace.


According to KCNA, here is the actual response:

Pyongyang, March 7 (KCNA) — The National Defence Commission of the DPRK issued a statement on Monday in connection with the fact that the U.S. imperialists and south Korean puppet forces decided to kick off the largest-ever joint military exercises Key Resolve and Foal Eagle 16 today.
They are claiming that the joint military exercises amount to “a crucial pressure” pursuant to the unreasonable UN “resolution on sanctions” faked up by them under the groundless pretext of the DPRK’s self-defensive first H-bomb test and its legitimate launch of earth observation satellite Kwangmyongsong-4.
The enemies, seized with extreme frenzy for invading the north, threw off even the deceptive mask “annual and “defensive ones”.
The situation is getting ever more serious as the enemies decided to stage the Key Resolve and Foal Eagle 16 joint military exercises by the way of fighting an actual war involving the thrice-cursed “beheading operation” aimed to remove the supreme headquarters of the DPRK and “bring down its social system” pursuant to the extremely adventurous OPLAN 5015.
The statement solemnly clarified the following principled stand as regards the fact that the prevailing situation reached a dangerous phase which should not be overlooked any longer:
1. The army and people of the DPRK will launch an all-out offensive to decisively counter the U.S. and its followers’ hysteric nuclear war moves to plunge the space of the DPRK’s existence into a nuclear disaster, not content with wantonly encroaching upon the sovereignty and security of the dignified DPRK.
Tragedy is that the U.S. and its followers have not yet realized how the illegal and outrageous “sanctions” make this land boil like a crucible of battle for wiping out the enemies and into what great fury their war frenzy for invading the north with nuclear threat is lashing all the service personnel and people of the DPRK.
As the enemies are foolishly resorting to military means including nuclear attack on the DPRK, all its service personnel and people will turn out in the general offensive to fully demonstrate the tremendous military muscle with nuclear force as pivot which they have built under the slogan of wiping out the U.S. imperialists and their lackeys to the last man.
2 . The army and people of the DPRK will take military counteraction for preemptive attack so that they may deal merciless deadly blows at the enemies under the grave situation where they are working with bloodshot eyes to infringe upon the dignity, sovereignty and vital rights of the DPRK.
We have the Juche-based mode of military counteraction to defend the socialist country as firm as a rock from any aggression and war in the world.
As the joint military exercises to be staged by the enemies are regarded as the most undisguised nuclear war drills aimed to infringe upon the sovereignty of the DPRK, its military counteraction will be more preemptive and offensive nuclear strike to cope with them.
The indiscriminate nuclear strike to be made by the DPRK will clearly show those keen on aggression and war the military mettle of Juche Korea.
Preemptive nuclear strike of justice is to be made in the order specified by the Supreme Command of the Korean People’s Army in its crucial statement.
3. If the enemies dare kick off even the slightest military action while vociferating about “beheading operation” aimed to remove the supreme headquarters of the DPRK and “bring down its social system”, its army and people will not miss the opportunity but realize the greatest desire of the Korean nation through a sacred war of justice for reunification.
We have a military operation plan of our style to liberate south Korea and strike the U.S. mainland ratified by our dignified supreme headquarters.
Pursuant to it, offensive means have been deployed to put major strike targets in the operation theatres of south Korea within the firing range and the powerful nuclear strike means targeting the U.S. imperialist aggressor forces bases in the Asia-Pacific region and the U.S. mainland are always ready to fire.
If we push the buttons to annihilate the enemies even right now, all bases of provocations will be reduced to seas in flames and ashes in a moment and the U.S. imperialists’ nuclear strategic means on which the puppet forces depend as “saviors” turn into piles of scrap iron whether they are in the air, seas and land.
The time will prove how the crime-woven history of the U.S. imperialists who have grown corpulent through aggression and war will come to an end and how the Park Geun Hye group’s disgraceful remaining days will meet a miserable doom as it is keen on the confrontation with the fellow countrymen in the north.
The army and people of the DPRK will make the gunfire of provocateurs in the reckless war of aggression sound as a sad dirge. -0-

Breaking News Russian Jet Shot Down by Turkey, Putin: We Have...

Report: The US Nukes Housed At Incirlik in Turkey Are At...