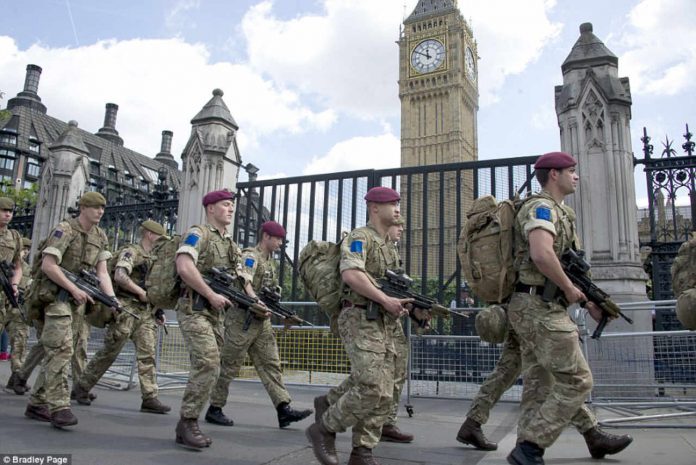 After a recent terrorist attack in Manchester, Britain is preparing for the worst by deploying thousands of troops to patrol the streets, canceling events and even closing the parliament buildings.

The ‘lockdown measures’ were taken after local police in Manchester revealed that the terrorist, Salman Abedi, a 22-year-old Mancunian of Libyan descent, who conducted the attack on an Ariana Grande concert was apart of a ‘terror network.’

With soldiers patrolling the streets and carrying rifles only fired in war-zones, it must make one wonder if Martial Law has been declared.

Rows of soldiers marched into the Houses of Parliament on may 24th, 2017 in the largest-scale deployment at the world-famous site since the Second World War.

The streets of Britain according to pictures captured by the DailyMail look similar to that of the militarized police force that was deployed after the Boston Bombings in the USA.

The moves were taken as:

The deployment of troops comes after Theresa May raised the threat level to ‘critical’ and warned that a further terror attack might be ‘imminent’ following Manchester bombing.

Such a declaration, deployment and response to the terrorist attack might make people wonder if Britain just declared martial law, what say you reader?

It was all done by design, Problem – Reaction – Solution, don’t fool yourselves into believing the government has the people at heart: It was… Read more »

Nate: Did you read in today’s news the story from Minnesota about “two Middle Eastern Brothers” found with a car full of weapons, ammo, bomb-making… Read more »

Yes, though “unofficially declared” martial law may be slightly more accurate… on paper.

open border policy is a disaster . These global elites want to destroy as many human lives possible because they hate humanity . No matter… Read more »