The world is on the brink of the most catastrophic war in the history of mankind, the Third World War, and the entire geopolitical landscape is undergoing a foundational shift. According to US Army Chief, the next world war is “almost guaranteed,” and would be “extremely lethal and fast.”

Mark Miley, chief of staff United States Military, claims “The strategic resolve of our nation, the United States, is being challenged and our alliances tested in ways that we haven’t faced in many, many decades,” Army Chief of Staff Gen. Mark Milley told an audience at the Association of the United States Army’s annual meeting in Washington, D.C.

Miley continued, “I want to be clear to those who wish to do us harm … the United States military — despite all of our challenges, despite our [operational] tempo, despite everything we have been doing — we will stop you and we will beat you harder than you have ever been beaten before. Make no mistake about that.”

The fact of the matter is that World War Three is beyond denial at this point, even the United States Military is claiming it’s imminence. According to Russia the world is undergoing a foundational shift, more specifically the Russian ambassador to the UK, Alexander Yakovenko, said this; 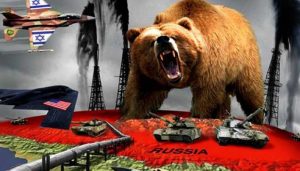 “The established world order, is undergoing a foundational shakeup, with the Crimea, Ukraine, and Brexit.” Later on the ambassador called for the dismantling of NATO, and the European Union. Yakovenko then stated “Russia can now fight a conventional war in Europe and win, Russia is the only country that will remain relevant forever, any other country is dispensable, and that includes the United States, we are in game now.”

It is far more evident now than ever before that relations between Russia and the United States are at all-time lows, and even worse than during the Cold War. In fact, according to “Doomed to Cooperate” editor Siegfried Hecker; recent actions by Putin to suspend the plutonium disposition accord with the US, which is one of the last agreements the two countries have, signals a major breakdown and that war is closing in.

The Plutonium Disposition was a deal set in place, by both Russia and the United States directly after the Cold War; and the agreement entailed the disposal of tons of plutonium to make sure it could never be put back into bombs. Both the Soviets and the US each had tens of thousands of nuclear weapons. Each nation had built stockpiles more than 30,000 nuclear weapons at that time. So when Russia decides to hold on to the plutonium, believe you me – something is up and both the US and Russian armies are gearing up for it.

“In short the ways and means of war is in my view is about to undergo fundamental, profound and significant change…In fact we are undergoing that change right now as we sit here. That change is evolutionary not revolutionary, but it is no less profound.”

Milley is referring to the ‘shift in power’ or in other words the New World Order.

“We know from history that unipolar and bipolar international systems tend to be very stable, but we also know that multipolar systems are inherently prone to competition, confrontation, instability and state on state wars. We are entering that multipolar future, and in fact we have probably been in it for a few years.”

The coming New World Order will rise from the ashes of the short-lived socialist, multipolar international system that is currently ‘under construction.’ The United State’s dominance is declining, and the Obama gang is facilitating that decline. Below is the list of polarities, and their explanations which can be read like a timetable.

The United States surfaced as the sole dominating power in world politics as there were no real challengers to their hegemonic position. This allowed greater room for the superpower to maneuver and to get involved in international issues that not necessarily coincided with national interest. We can describe this new political situation as being unipolar.

After the collapse of the short-lived multipolar world which led to World War Three, a new world will commence. That international order would be the return of an oligarchy, or in other words, the world would be centralized under a single governance. Under this New World Order, there would be no borders, a single currency, a single religion, operated under highly advanced technology (Artificial Intelligence).

Given the current state of geopolitics, Mark Milley then began to touch on the Homefront and where the military was in regard to readiness. It just so happens that the Chief of Staff indirectly states that Jade Helm was a success.

“In the past year we focused on current readiness and applied time and money into building it, and it’s improving and will remain our top priority. And now we have to define and build the army of the future. We’re heading in the right direction on both fronts. The process that we developed to think critically and deliberately is working and it’s guiding our investments and decisions.”

In 2015, the largest military drill took place across the nation, and it was called Jade Helm 15. Jade Helm began an ongoing exercise that introduces the military to predictive intelligence services. Under the artificial intelligence sectors of DARPA and IARPA, the military expanded their capabilities of predicting enemy combatants movements before their actual actions. On the Homefront, the army, and national guard failed to mention Russians as the enemies and instead the authoritarian forces named Christians and Conservatives as their enemies. In Jade Helm, various states were treated as “hostile” to the establishment, and one of those sates happened to be Texas.

In conclusion it is beyond evident that the United State and Russia are both gearing up for the largest war of our time, World War Three. However, this war will not be fought by the axis and allies, but rather this world war will be serving an agenda; to bring about the New World Order. Through the destruction of the current Order, the globalists will rise; or as famously stated, through their chaos they will “bring order.”

Other various quotes taken directly from Mark Milley throughout the speech (see video above):

“For whatever reason, the bottom line is that massive amounts of people in unprecedented numbers are moving from one country or one region to another, which is amplifying destabilizing effects. One of the most militarily significant mass migrations is the movement of people to cities, which has really been going on for well over a century. 75 percent of Americans lived in rural areas 100 years ago while today that number is completely in-versed with almost 70 percent of Americans living in urban areas. Globally we are witnessing urbanization on a massive scale. In 1950 only two cities, New York and Tokyo, had populations over 10 million people. Today there are 38 and it’s projected by 2050 there will likely be over 50 megacities of over 10 million inhabitants with 70 percent of the worlds estimated 8 billion people living in urban areas.”

“Climate change is yet another driver of future instability.”

“Maturity of various technologies that either exist today or in advanced stages of development when combined are likely to change the very character of war all by themselves.”

“With the advances in information technology we are now seeing an entire new domain of warfare in the form of cyber.”

MARK HODGE. “ WWIII WARNING Third World War would be ‘extremely lethal and fast’ US Army chiefs reveal as they discuss taking out Russia or China.” The Sun. . (2016): . . http://bit.ly/2d5pOWb