The White House has accused Syria of preparing a chemical weapons attack and warns that if such is conducted the Assad government, and military will pay a hefty price.

The United States has identified potential preparations for another chemical weapons attack by Assad regime that would likely result in the mass murder of civilians, including innocent children. The activities are similar to preparations the regime made before it’s April 4th, 2017 chemical weapons attack. As we have previously stated, the United States is in Syria to eliminate the Islamic State of Iraq and Syria. If, however, Mr. Assad conducts another mass murder attack using chemical weapons, he and his military will pay a heavy price.

The White House likened the current activities of the Assad regime to the actives just prior to the chemical weapons attack supposedly conducted on April 4th, 2017. However, no investigation was fully carried out to conclude that Assad used chemical weapons.

In addition, the US Ambassador to UN Haley says “any further attacks done to the people of Syria will be blamed on Assad,” as well as Russia & Iran.” 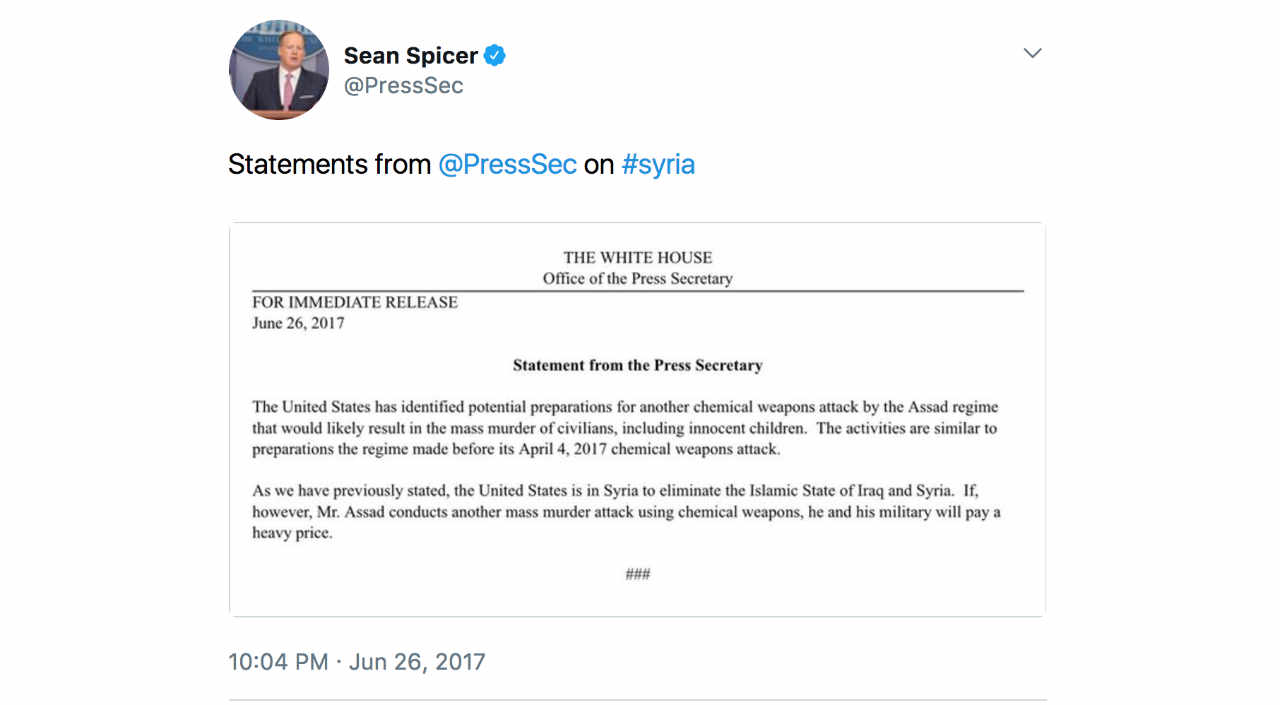 Earlier in June of 2017, the Pro-US forces in Syria conducted a strike against Assad’s forces. The coalition struck down an armed UAV that fired on coalition-backed forces on patrol; the aforementioned marks the first direct assault on the Assad coalition, going forward, it appears as though that it won’t be the last.

According to Seymour Hersch, you are absolutely correct in your assessment. Trump is not getting the right information. McCain, Graham, Schumer and Pelosi all want… Read more »

Where is any proof of this?

A great deal of the Syrian civilians are not Muslim but are Christian. ISIS is a secret CIA terrorist group created to destabilize the region… Read more »

as long as some islamic trash die , I do not care because ultimately these muslims grow up to be islamic terrorist and kill people… Read more »

Not good. The previous attacks attributed to the Syrian government are essentially debunked: the first by the UN, and the latter through info (the Seymour… Read more »

Multiple Dead In Shooting at Church in Sutherland Springs, Texas –...