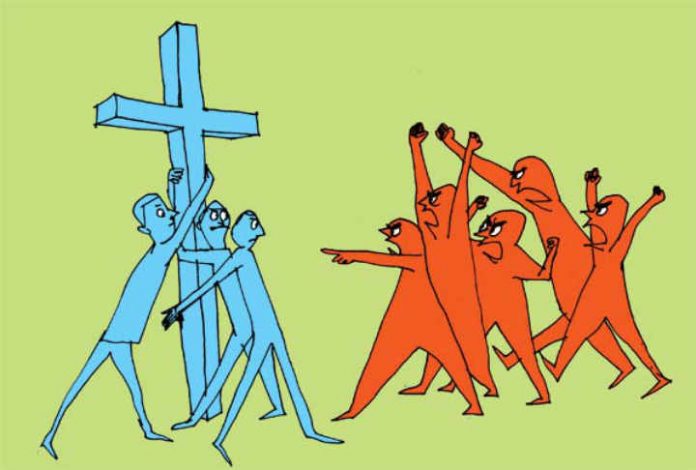 In 2013, one couple defied the claws of culture they refused to bake a cake for a lesbian couple; the firestorm that ensued has now just a couple of years later driven them to the brink, and as a result, they must close their shop and operate from their home.

But wait isn’t the LGBTQXYZINSDH community all about love and inclusiveness? Then why can’t our Christians views be ‘accepted’ and respected?

Simply denying folks service one time has lead to death threats, and so much more pain for a little Christian family attempting to hold on to their point of view. In America, a business owner reserves the right to deny service to anyone they wish, except apparently when it comes to the LGBT community.

According to the Blaze;

From threats to vicious phone calls and e-mails, the Klein family has been inundated with angry responses. Now, Aaron and Melissa have announced that they are shutting down their shop.

In a brief phone interview earlier this month, Melissa told TheBlaze that the couple has continued to face upheaval following their faith-based decision. Just days after we spoke, she and her husband announced that this past weekend was the family’s last at its current location.

The business will be transitioning, with the Kleins operating, instead, from their home.

“This will be our last weekend at the shop we are moving our business to an in home bakery,” read a post on the company’s Facebook page on Aug. 30.

On the same Facebook page just few days earlier, the family shared appreciation for the support the owners received in the wake of media coverage surrounding their cake-baking battle.

“Thank you again everyone for your up lifting words, and encouragement! It is much appreciated,” one message read. — See More

From mere threats of violence to proclamations that Aaron should be shot to one apparent threat that he be raped, the hate and anger being thrown the Klein family’s way is certainly serious in nature. Some have even wished for the couple’s five children to be stricken with illness.

“You stupid bible-thumping, hypocritical b**ch. I hope your kids get really, really, sick and you go out of business,” read one e-mail.

“Here’s hoping you go out of business, you bigot. Enjoy hell,” read another.

Regardless of the hate thrown at you as a Christian, it’s time to take a stand against culture as a Christian. We are called to be separate, sanctified, and made righteous by the precious Blood of our Savior.

The Klein family is one the many victims, as of late, of the increasingly “tolerant” liberal, communistic LGBT community – they stood tall shouldn’t we?

Miley Cyrus Shows Us Everything that’s Wrong with Easter