With the 40 Days Of Life campaign in full swing in over 20 different nations, it will not be uncommon to drive past your local abortion clinic and see anti-abortion advocates pleading for the lives of precious babies.

While America has tried to make abortion a political issue under the guise of “women’s health care”, followers of Christ know that it is not a political issue, but rather a moral issue. In Proverbs 24:11-12 we are told to “rescue those being led away to death; hold back those staggering toward slaughter.”

The book of Proverbs was divinely inspired by King Solomon who was given knowledge and wisdom straight from God. It is safe to say that Proverbs is a good standard for morals, conduct and the meaning of human life.

When it is a matter of life, death and biblical commandments it should be taken seriously. Unless of course you are Kris Aaron, the Senior Pastor at First Baptist Church, Bristol, VA and his congregation.

Recently, Sammi Cooper from A Cause For Christ abortion ministry decided to start reaching out to her local churches to join her mission to save babies from being slaughtered in her city. The first church that came up in her Google search was FBC in Bristol, VA which is a mere 12 minute drive to the local abortion clinic. When she called she was transferred to Kris.

Sammi began to plead with him to get involved with the murder crisis down the street. Kris explained to her that his “church has many congregants who belong to all different political parties and that some would be offended”. Kris stated that “he and the congregation do not get involved with partisan issues“. Sammi then began to express that it is not a partisan issue, instead, it is murder. She continued to tell him that it is biblical to stand up for the weak (Psalm 82:3-4), be a voice for the voiceless and defend the ones who cannot defend themselves (Proverbs 31:8-10). Sammi was immediately shut down by Kris who told her he “was not going to get into a theological debate” with her.

Subsequently, Cory Gibson, a Tennessee local reached out to First Baptist Church of Bristol via Facebook, in disbelief of what was reported from the telephone conversation with Kris. The conversation went almost word for word exactly the same as it had when Sammi made contact just a few short hours before. Cory swiftly rebuked Kris for his disobedience to Gods word. 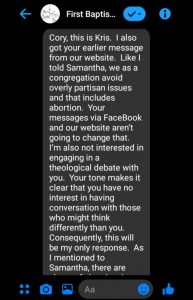 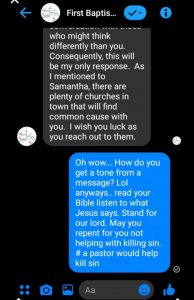 Not many of you should become teachers, my brothers, for you know that we who teach will be judged with greater strictness. -James 3:1

President of Tennessee Pastors Network, Dale Walker has been calling out those who are supposed to be leaders in our churches, Christians in our communities, and defenders of life- to rise up and end abortion. He recognizes that even pastors are falling short of their responsibility to defend the right to life. Pastor Dale accurately described the modern day silent church when he said:

“These silent churches are Franchised Religion Churches. The same thing happened in Germany when the Jews were hauled off in trains. As they would be going by the silent churches reportedly sang louder so they didn’t hear the cries of the Jews on their way to their death.“

Where is the church? Why is this holocaust being allowed when churches are right down the street? The blood is on our hands. WAKE UP CHURCH, our littlest neighbors are being slaughtered while we sit in our pews and pray for change. We are the change! Why aren’t we doing what Christ has called us to do? What will we tell God when He stands us before Him and asks “Why did you do nothing?”

ChristianJournal reached out to Kris Aaron at kris@fbcbristol.org requesting a comment. NO response has been given at time of publishing.