Choices: Stories You Play is an interactive game recommended to girls as young as 9 and even attainable through Pinterest! It’s loaded with “choices” girls can make that are causing them to experiment with a wide variety of sexual partners!

Picture this: you have a daughter starting her freshman year of college. She is smart, confident, grounded, and has the world at her feet. You want nothing but the best for her, and of course this includes her experience with higher education. Your daughter arrives for her first day on campus. Almost right away, she quite literally bumps into a young man, who explains that he doesn’t mind being “tackled” by a pretty girl.

Next, your daughter moves into her new home. She realizes both male and female students will be living there, and immediately wonders how many of her housemates – of either gender – she will “hook up” with. She meets her new roommate, a girl who encourages her to show up at a campus party where she will be seen by the entire student body wearing only a bikini. Finally, she meets a sorority girl with whom she instantly gets into a catfight over a guy, claiming victory not because of the words she used or how she chose to take the high road, but because of how great she looks in her bikini. Your daughter steps back, sighs contentedly, and says, “Now THIS is college!” 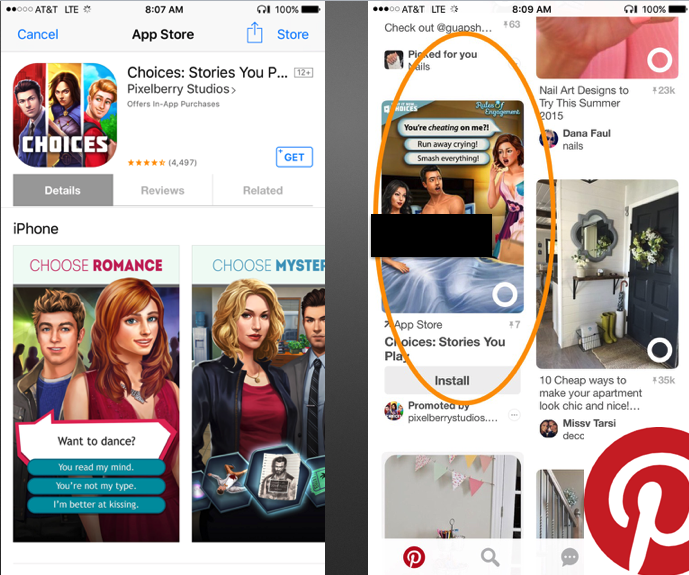 Dangers of Choices: Stories You Play

Does this sound like your worst nightmare? Maybe it is, but it’s also a scenario typical of the game “Choices: Stories You Play,” an app for Apple and Android published by Pixelberry Media. The app allows players to choose an avatar and a name for themselves to use while navigating through a series of, well, choices. There are several different scenarios you can place yourself in and one of them is being a college freshman at a (fictional) top university. Though the avatars a female player can choose from are of varying skin tones and thus we are supposed to see them as racially diverse, they all have a few key things in common: they are all thin, scantily dressed, and stereotypically beautiful.

Because the game is interactive, and the outcomes of each different scenario are dependent on what the player chooses, there are many ways the whole pretty-young-college-freshman scenario can play out. However, one thing is clear: this game is rife with stereotypes that are damaging to young women and men alike. Females are adversaries to one another, competing to see who can better sexually attract a man, and men are pieces of meat to be fought over who only value women for their looks. In the round I played, my avatar got into an argument (over a guy, naturally) with another character. She was then told by her roommate, “Your bikini won you an enemy,” and “Your first day and you already have a nemesis, you are so lucky!” because in the world of Choices, girls are meant to be valued based primarily on their physical appearance and to compete for attention from guys, rather than lift each other up.

Why this is concerning

So why, you may be thinking, does this game affect me as a parent? Because not only is it easily downloadable on any smart phone or tablet, its advertisements are imbedded in other popular apps such as Pinterest, allowing your son or daughter to be exposed to a game where they are encouraged to explore totally inappropriate and sometimes graphic situations involving drinking, partying, and sexuality. The game is heavy-handed with sexual trysts and relationships of all kinds, and players are often encouraged by other characters in the game to choose bad behavior – meanness, drinking, promiscuity – over morally sound choices. Frighteningly enough, I changed the settings on my App Store to find games specifically appropriate for ages 9-11, and Choices did indeed make it through that filter!

Moms, watch this quick clip about one of the scenes from the Freshman Book 4 – chapter 5 in the Choices game. It gets super sexual between two women at the 17 minute mark. This is what our kids are playing and we wonder why they are experimenting with the same sex, getting pregnant, and contracting an STD at 13 years of age. This company does anything BUT protect our young children!

Ironically, the creator of the game, Pixelberry Studios, includes a mission statement on the homepage of their website stating that they aim “to entertain and educate players via games.” The creators go on to say “We’re a small team, but we try hard to do the right thing. We’re excited to be making a difference through our games.” Though I am unsure what difference they are striving to make, it is abundantly clear that they are NOT “doing the right thing” for the youth they are exposing this game to. To voice your concern, click here to contact Pixelberry Studios to implore the makers of this game to – if they really do wish to educate – help educate our children to make smart choices, rather than dangerous, amoral, and downright poor ones.

Since the game unfortunately passes through age filtering, it should be blocked on your child’s device if you don’t want them exposed. Blocking an app from being downloaded onto your child’s iPhone is simpler than you may think!

This passcode will need to be entered before your child can access or change any restricted areas on his or her device. This includes the app store! You can block all apps from being downloaded, and when your child approaches you wanting to download a particular app, you’ll have the opportunity to explore it for yourself first before it can be downloaded. (Handily, this feature also allows parents to block the ability to open any existing apps, so if you want to limit your child’s ability to go on Facebook, Instagram, and the like this is a great way to do it!) Android devices unfortunately are not able to block free apps from being installed, however there are apps parents can download (such as AppLock) to prevent certain apps from being accessed.

If you would like further research on this game, you can read many parents’ comments on their experiences with Choices through the Common Sense Media review here. If you’re wanting to do a pop culture purge in your home and replace any games that do not line up with your family values, text the words MEDIAGUIDE (no spaces) to the number 44222 and you will be emailed a sweet Parent Media Guide loaded with positive entertainment options for your kids! For CDs and DVDs to help your kids see Hollywood’s true agenda, click here to check out the new store!

Rachel Rose was the contributing writer for this article.