Siberia, the land of “rarities.” Recently in Siberia either a portal or a myth was proven true; the “phenomenon” known as a “Ball of Lightening” appeared and was caught on camera.

Novosibirsk State Technical University graduate Roman Tregubov, who currently resides in Canada, posted this video he took in the countryside just outside Novosibirsk while visiting Russia in July.

“This is the first time I’ve seen a ball lightning!!!! I even managed to film it a little… Awesome,” Roman emotionally captioned the video he shared on his Facebook page on July 18, 2016. “Anyway I was shocked to see such a big and strong fireball… And whole process from his birth to death… Sounds… Visual… Feelings…[sic],” Tregubov continued. He later made the video public and the sighting of the rare phenomenon was quickly shared with a much wider audience, making it into various Russian media outlets.

Up until the 1960s, ball lightning was considered an urban myth. Due to inconsistencies and to the lack of reliable data, the true nature of the phenomenon remains unknown.These fireballs can dramatically vary in size from as little as a pea to several meters in diameter. This particular sighting is supposedly a large one.

Wikipedia: Ball lightning is an unexplained atmospheric electrical phenomenon. The term refers to reports of luminous, spherical objects which vary from pea-sized to several meters in diameter. Though usually associated with thunderstorms, it lasts considerably longer than the split-second flash of a lightning bolt. Many early reports say that the ball eventually explodes, sometimes with fatal consequences, leaving behind the odor of sulfur.[1][2]

Until the 1960s, most scientists argued that ball lightning was not a real phenomenon but an urban myth, despite numerous reports from throughout the world.[3] Laboratory experiments can produce effects that are visually similar to reports of ball lightning, but how these relate to the natural phenomenon remains unclear.

Scientists have proposed many hypotheses about ball lightning over the centuries. Scientific data on natural ball lightning are scarce, owing to its infrequency and unpredictability. The presumption of its existence depends on reported public sightings, and has therefore produced somewhat inconsistent findings. Due to inconsistencies and to the lack of reliable data, the true nature of ball lightning remains unknown.[4] The first ever optical spectrum of what appears to have been a ball-lightning event was published in January 2014 and included a video at high frame-rate.[5][6]

It is still unknown what exactly this sighting is, a physicist by the name of Aleskandr Tyutin, from the Physics Department of the Novosibirsk State University, believes this to be a ball of lightning as well.

“Judging by how it changes color, form and by how it moves with the wind – it actually most probably is ball lightning. I can’t imagine another phenomenon with such glowing effect,” he said.

He added that although Tregubov was filming from a safe distance, it’s best not to get closer to these balls of fire, but that the worst thin someone can do is to run away.

“If you start running from ball lightning, it will start following you in the air flow you create making it nearly impossible to escape. It’s best to stand still,” Tyutin concluded. –RT

The strange sighting seems to resemble more of a portal because the ball never moved, it was as if the ball fixated to that particular location and Siberia is a “hot spot” for “strange” or demonic activity. Another well-known place resides in Siberia, and it is called the Siberian door to hell.

Take Turkmenistan’s aptly named Door to Hell, a 230-foot-wide crater in the middle of the desert near the village of Deweze. In 1971, a team of Soviet scientists set up a drilling platform looking for natural gas reserves. The rig collapsed, and fearing the spread of poisonous methane gas, the researchers set the crater on fire hoping it would burn out in a few hours.

That was more than 40 years ago. –More

A range of stories have surmounted around the mysterious door to hell, such as screaming and gnashing sounds from the abyss and so on. However, the ball of fire could be just that a ball of lightning/fire. Regardless the phenomenon does raise the question why have their been such rarities in nature lately? 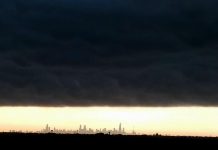 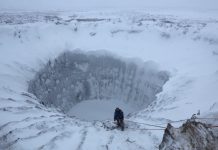 The Heavens: Crazy Atomic Bomb Like Cloud Appears over Arizona