John Bolton, the former U.S. ambassador to the United Nations, questioned reports of Russian interference in the U.S. presidential election. Bolton stated that the Russian hacks could be a false flag committed by the Obama administration.

“It is not at all clear to me, just viewing this from the outside, that this hacking into the DNC and the RNC was not a false flag operation,” he told Fox News’ Eric Shawn on Sunday.When pressed about his use of the phrase “false flag” and whether he was accusing an entity in the U.S. of involvement, Bolton said, “We just don’t know.” – The Hill 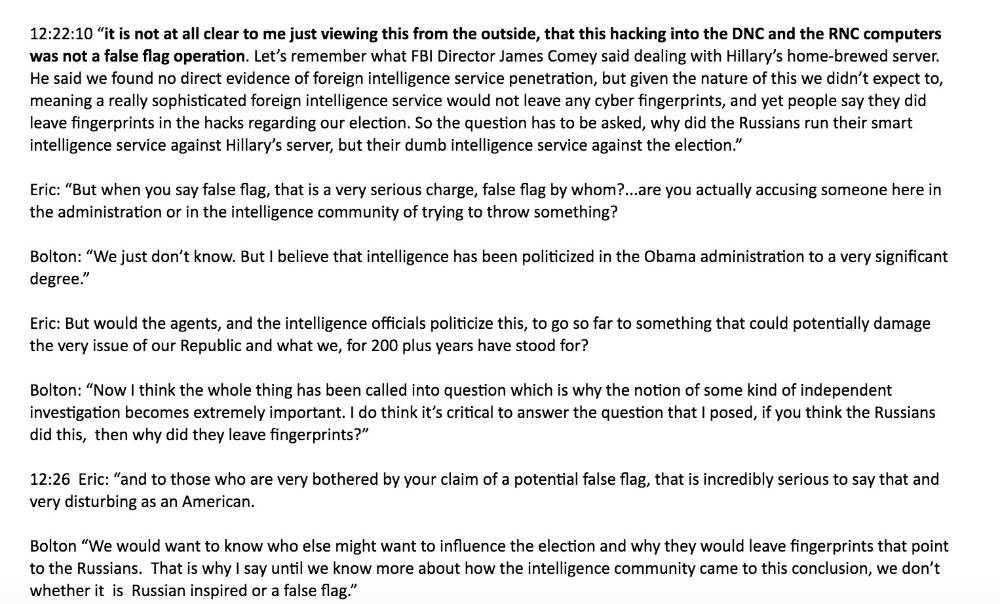 The Washington Post reported Friday that the CIA concluded Russia intervened in the election to help Trump win the presidency.

The establishment is calling for another election, claiming that Russia has influenced the 2016 presidential elections – making Donald Trump’s victory illegitimate. What appears to be taking place is another intelligence coup. Before voting day, America witnessed an intelligence coup; the FBI concluded that there was no clear link between Donald Trump and Russia. Meaning that the current establishment – did not want Hillary Clinton in office.

WASHINGTON — For much of the summer, the F.B.I. pursued a widening investigation into a Russian role in the American presidential campaign. Agents scrutinized advisers close to Donald J. Trump, looked for financial connections with Russian financial figures, searched for those involved in hacking the computers of Democrats, and even chased a lead — which they ultimately came to doubt — about a possible secret channel of email communication from the Trump Organization to a Russian bank. – The NY Times

Now, the CIA is claiming through ‘secret documents,’ which no one has seen, that Donald Trump’s election was won mostly due to Russian hacking.

The coup appears to be because the intelligence agencies do not want Donald Trump or Hillary Clinton in office. If a re-election were to take place, the questions are would Donald Trump and or Hillary Clinton be allowed to re-run? That is of course if all of this is not ‘just for show,’ to keep the people divided against Trump. Or, would Barack Obama gain another year in office?

Bipartisan groups are also calling for the release of the reports regarding Russian interference within the 2016 elections. With most likely one motive – to invalidate Trump’s election, and call for another presidential election.

What say you reader, are we witnessing a second coup?