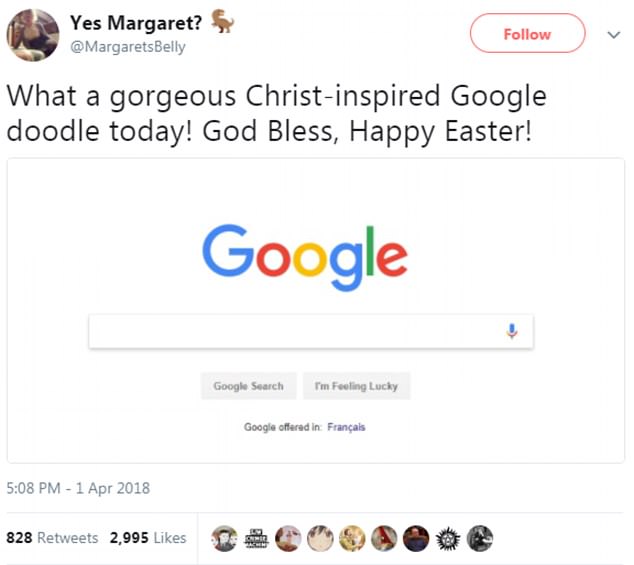 Googles anti-Christian campaign continued well into Resurrection Sunday this year. Everyday Google posts a new doodle created by their artists on their main search page. This Sunday, Christians may have expected some festive pastels for Easter, but Google carried on their Easter tradition of not posting a thing for the holiday. This non-festive custom has been done now for 17 years.

The tech giant claims that in its ‘Doodle guidelines,’ there are no Doodles for religious holidays. But that just isn’t true, they have created Doodles for holidays such as Tu B’Av, a Jewish ‘holiday of love’ and Holi.

“Today’s Google doodle marks the start of Holi, the Hindu holiday signaling the end of winter and [insert great sigh of relief] beginning of Spring” Google said on March 2.

According to Wikipedia, “Holi is an ancient Hindu religious festival which has become popular with non-Hindus in many parts of South Asia, as well as people of other communities outside Asia.”

‘Doodles may appear for some non-religious celebrations that have grown out of religious holidays, such as Valentine’s Day, Holi’s Festival of Colors, Tu B’Av and the December holiday period, but we don’t include religious imagery or symbolism as part of these.’ Google said in a statement.

From it’s beginning Google has held an anti-Christian narrative. This year they went on a YouTube banning spree censoring Christian YouTube channels for hate speech. It was also exposed that ‘Google Home’ refuses to answer ‘Who is Jesus,’ but has lots to say about Muhammed, Buddha, Satan.

What do you think of Googles lack of enthusiasm surrounding the Christian holidays? Let me know in the comments!

The people at Google who make the “Doodle” decisions have knees, right? Eventually, they will have a “Come to Jesus” meeting. (Phil 2:8-11) “And being… Read more »