Nathan Larson is running as an Independent in his home state of Virginia. The candidate resides in the city of Charlottesville and is a thirty-seven-year-old Accountant.

While speaking to HuffPost, the candidate, Nathan Larson, shockingly admitted that he is a pedophile who ran now-defunct chat rooms that served as gathering places for other pedophiles and violence-minded misogynists like himself.

The Accountant also, in online postings, often bragged about raping his late ex-wife. The HuffPost uncovered that the candidates IP address was being used by the aforementioned forums, and others. Also, the Accountant confirmed that he was the owner of those forums before the domain host terminating them.

“A lot of people are tired of political correctness and being constrained by it,” he said. “People prefer when there’s an outsider who doesn’t have anything to lose and is willing to say what’s on a lot of people’s minds.”

When asked whether he’s a pedophile or just writes about pedophilia, Nathan Larson said, “It’s a mix of both. When people go over the top, there’s a grain of truth to what they say.”

Larson, the candidate, in one essay, confirmed by the HuffPost, wrote about father-daughter incest and another about raping his ex-wife repeatedly. When asked if there was any truth to those postings the candidate responded, that there is a “grain of truth” in his writings.

Furthermore, in the manifesto,Nathan Larson called Nazi leader Adolf Hitler a “white supremacist hero.” Additionally, he urged Congress to repeal the Violence Against Women Act, adding, “We need to switch to a system that classifies women as property, initially of their fathers and later of their husbands.” Also, he showed sympathy for men who identify as involuntary celibates, or incels, suggesting it is unfair that they “are forced to pay taxes for schools, welfare, and other support for other men’s children.”

Remarkably, the manifesto written by Larson has only a minute amount of his dark intentions. The HuffPost reported on some of the conversations which he was partaking in online, which reveal an alarmingly disgusting worldview.

In addition, more of the candidate’s online postings can be seen in the image below. According to one of the site’s Larson partakes in called “incelocalypse,” which apparently refers to “the day we make the jailbaits our rape-slaves.” (The term “jailbait” is slang for a person who is under the legal age of consent for sex.) 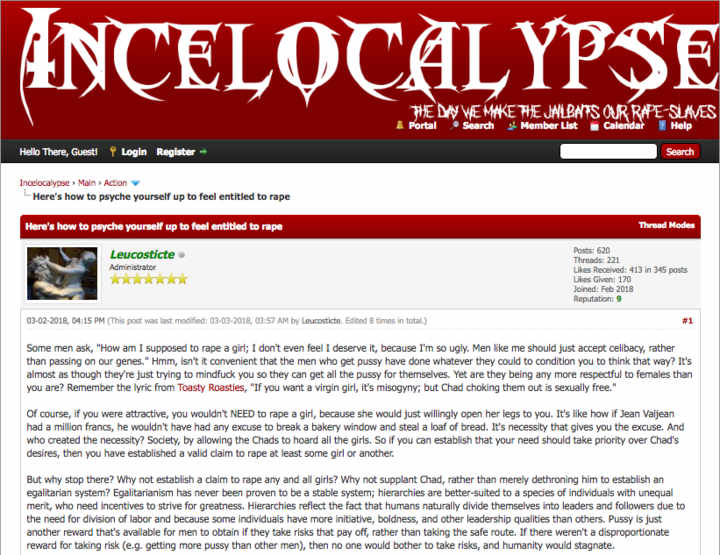 Finally, unbelievably, Larson has a three-year-old daughter, which thankfully, he does not have parental rights over. In 2015, the ex-wife of the candidate obtained a court-ordered restraining order before she died by suicide after gaining full custody of their daughter. Even with the grotesque nature of this individual and his appalling behavior, Larson has remarried and is now living in Catlett, Virginia.

While every single American Citizen is granted the right to run for office, has America fallen so far away from God that creeps like Larson are actually able to run for political office? – Tweet This?

In 2008, a report published by CNS News detailed how American’s fears are growing over apparent academic efforts by prestigious institutions around the country to normalize pedophilia. In 2018, an open Pedophile is running for office.