It’s 2025, and somehow someway over half of the population of the United States vanished. The question is where did everybody go?

Amidst all of the predictions, and all of the calculations brought out by the intelligence agencies regarding the future of the world, there is one website that claims the United States will have less than 20% of its populace remaining in 2025. 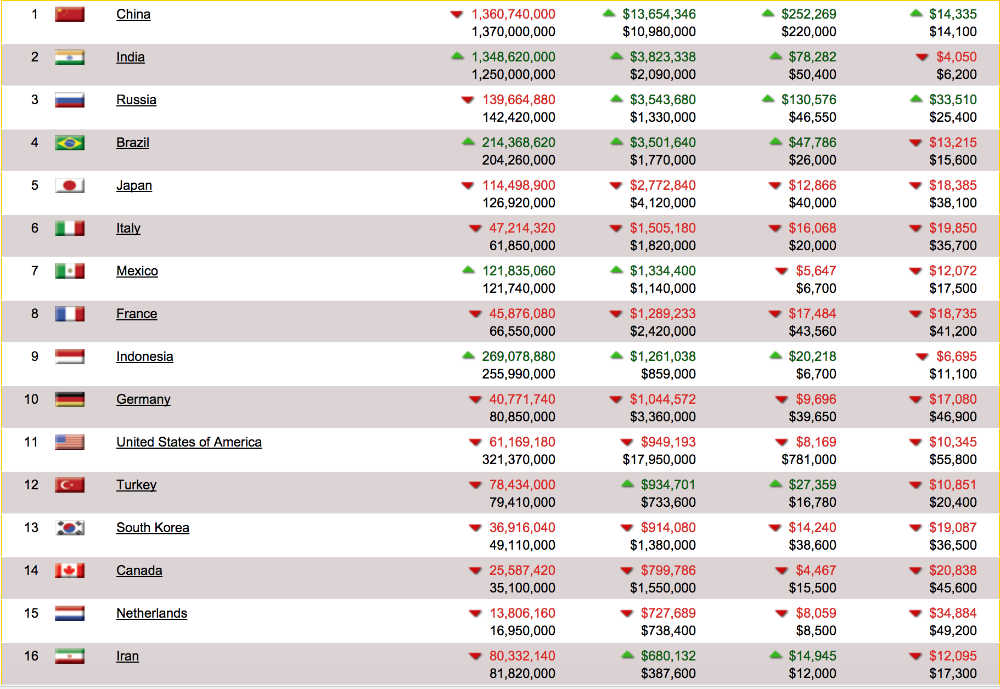 Previously The Christian Journal reported that intelligence agencies have claimed that by 2025 the world would be entirely multipolar, and the with the rise of multipolarity comes economic strife, conflict, civil unrest, and great discord amongst nations.

However, according to Deagel, a military website that provides upcoming Air Shows and Exhibitions; and forecasts countries GDP and Population statuses, the US by 2025, will be a much different place.

The stats are as follows;

If the Deagle website is even remotely correct, the only question that can come from their estimates, is what on Earth happened to the United States?

Fortunately, the Deagle website also provides a brief explanation (shown below) regarding the estimates provided; let us know what you think in the comments below.

There have been many questions about the countries forecast specially the one focusing on the United States of America (USA). They won’t be answered one by one but below you can find some explanation, thoughts and reflections. We are going to keep this as short as possible.

The majority of the economic and demographic data used in the making of the forecasts is widely available by institutions such as the CIA, IMF, UN, USG, etc. You can see the most relevant data at every single country’s page. There is a tiny part of data coming from a variety of shadow sources such as Internet gurus, unsigned reports and others. But all these sources are from the internet and are of public domain for at least a minority. For example, several years ago Dagong, the Chinese ratings agency, published a report analyzing the physical economy of the States comparing it with those of China, Germany and Japan. The conclusion was that the US GDP was something between $5 to $10 trillion instead of $15 trillion as officially reported by the USG. We assume that the official data, especially economic, released by governments is fake, cooked or distorted in some degree. Historically it is well known that the former Soviet Union was making up fake statistics years before its collapse. Western as well as other countries are making up their numbers today to conceal their real state of affairs. We are sure that many people out there can find government statistics in their own countries that by their own personal experience are hard to believe or are so optimistic that may belong to a different country.

Despite the numeric data “quantity” there is a “quality” model which has not a direct translation into numeric data. The 2014 strain of Ebola has a death rate of 50-60% but try to imagine what would happen if there is a pandemic of Ebola with hundreds of thousands or millions infected with the virus. So far the few cases of Ebola-infected people have “enjoyed” intensive healthcare with anti-viral and breathing assistance but above all with abundant human support by Physicians and nurses. In a pandemic scenario that kind of healthcare won’t be available for the overwhelming number of infected leading to a dramatic increase of the death rate due to the lack of proper healthcare. The “quality” factor is that the death rate could increase to 80-90% in a pandemic scenario from the stated 50-60% rate. The figure itself is not important what is relevant is the fact that the scenario can evolve beyond the initial conditions from a 50% death toll to more than 90%. By the way, no pandemic or nuclear war is included in the forecast.

The key element to understand the process that the USA will enter in the upcoming decade is migration. In the past, specially in the 20th century, the key factor that allowed the USA to rise to its colossus status was immigration with the benefits of a demographic expansion supporting the credit expansion and the brain drain from the rest of the world benefiting the States. The collapse of the Western financial system will wipe out the standard of living of its population while ending ponzi schemes such as the stock exchange and the pension funds. The population will be hit so badly by a full array of bubbles and ponzi schemes that the migration engine will start to work in reverse accelerating itself due to ripple effects thus leading to the demise of the States. This unseen situation for the States will develop itself in a cascade pattern with unprecedented and devastating effects for the economy. Jobs offshoring will surely end with many American Corporations relocating overseas thus becoming foreign Corporations!!!! We see a significant part of the American population migrating to Latin America and Asia while migration to Europe – suffering a similar illness – won’t be relevant. Nevertheless the death toll will be horrible. Take into account that the Soviet Union’s population was poorer than the Americans nowadays or even then. The ex-Soviets suffered during the following struggle in the 1990s with a significant death toll and the loss of national pride. Might we say “Twice the pride, double the fall”? Nope. The American standard of living is one of the highest, far more than double of the Soviets while having added a services economy that will be gone along with the financial system. When pensioners see their retirement disappear in front of their eyes and there are no servicing jobs you can imagine what is going to happen next. At least younger people can migrate. Never in human history were so many elders among the population. In past centuries people were lucky to get to their 30s or 40s. The American downfall is set to be far worse than the Soviet Union’s one. A confluence of crisis with a devastating result. -Read More