America is set for a remodel in the coming years. According to Donald Trump, ‘we’re going to rebuild our cities, and rebuild our infrastructure.’ While a remodel is needed, the architecture and plans are concerning; the latest proposal by Elon Musk is alarming, because of its similarity to the mysterious FEMA tunnels.

Throughout 2015, Americans were concerned with Jade Helm 2015, ‘Walmart remodels,’ and tunnels. In 2016, we were concerned with the possibility of Hillary Clinton obtaining office or Obama staying in office as president. For 2017, a new/old concern is arising – tunnels.

Elon Musk recently tweeted “traffic is driving me nuts, am going to build a tunnel boring machine and just start digging.” The tweet was not the first time the CEO and CTO of SpaceX has mentioned a plan regarding tunnels, which has now officially become an agenda of Elon Musk. 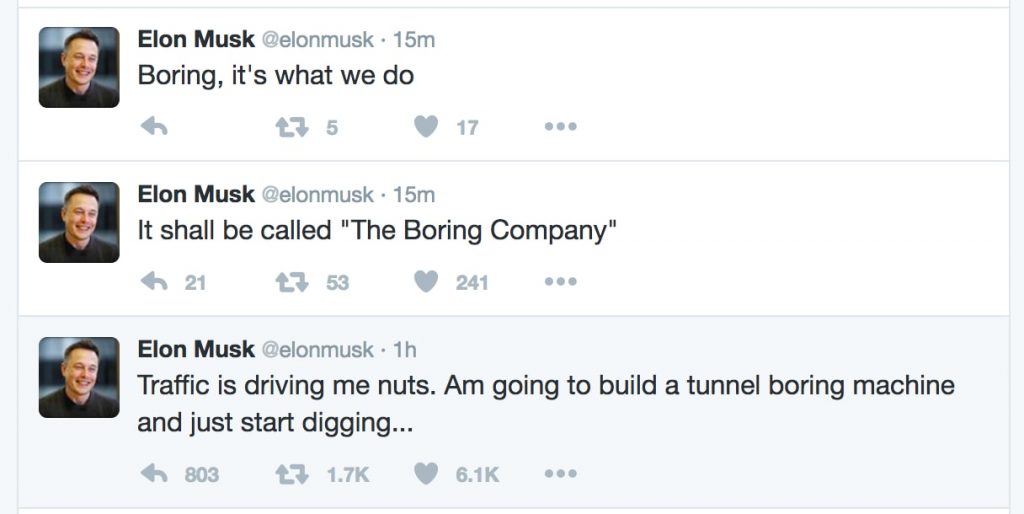 Elon Musk’s agenda includes creating a company called ‘The Boring Company,’ which will potentially create tunnels under cities to alleviate traffic congestion. While some may have seen his tweet as a joke, the definition of boring is to make a hole by drilling with such an instrument, a much different definition than an apathetic state of mind. Musk has also envisioned a high-speed transportation system known as the Hyperloop, a proposed mode of passenger and freight transportation that propels a pod-like vehicle through a near-vacuum tube at airline speeds. The pods accelerate to cruising speed gradually using a linear electric motor and glide above their track using passive magnetic levitation or air bearings.

While Elon Musk is one of many who has made such proposals, it is important to note, that Elon Musk is also an adviser to Donald Trump. That said, Musk’s projects align directly with other globalist ideology that America is set for a remodel into a globalist country.

Similarly, the United Nations has an agenda for the globe, set in stone in 2015, the 2030 Agenda sprung into being as a continuation of Agenda 21. Under Agenda 2030 are a set of ‘goals’ for humanity. Goal Nine is currently in focus in regard to infrastructure.

Elon has proposed various times that he would like to see tunnels under cities come about to alleviate the ‘congestion’ and traffic. However, is there another agenda at play?

For decades, people far and wide have warned about the coming FEMA tunnels; now Elon Musk is reportedly going to construct them, under US cities. Even though Musk has proposed it, Trump has to approve it. This means that currently there is no telling what the plans would be for underground tunnels – but it significantly appears as though the globalists are gearing up to construct the Megacities of the New World Order.

The only question is, with Parag Khanna designing the FEMA map, through infrastructure, is Elon Musk creating the FEMA tunnels?