Within the sustainable development goals of the United Nations, Goal 9 and 11 aim at building megacities and facilitating urbanization. This ideology is a citizens nightmare and a totalitarian regimes haven.

Over the last several years, a trend has taken place throughout the world, not just America, and that trend is urbanization; the process by which a population moves from the country into the cities.

Today, more than half of the world’s population live in urban areas, and over the next several years those figures will significantly increase.

However, in the current America, and other countries of the world, one thing is holding back the wholesale rise of urbanization, and that is infrastructure. The existing infrastructures of modern cities are not entirely designed to house the millions of people moving to them each year, nor are they intended to protect the individuals that live within them.

Enter Agenda 2030, specifically goals nine and eleven. Under the UN’s sustainable development agenda, a plan has taken shape, on how to further control the world’s cities, and the populations therein. When people live amongst their own country and are not confined to the walls of cities, it is far harder for a regime, a government, and or a company to monitor the citizens. But, in megacities, it is much easier for organizations to monitor the actives of the citizens because they are confined to an area, and deprived of free reign.

The agenda for urbanization was birthed many years ago, going all the way back to Uruk: “…one of the most important cities (at one time, the most important) in ancient Mesopotamia. According to the Sumerian King List, it was founded by King Enmerkar. Located in the southern region of Sumer (modern day Warka, Iraq), Uruk was known in the Aramaic language as Erech which, it is believed, gave rise to the modern name for the country of Iraq (though another likely derivation is Al-Iraq, the Arabic name for the region of Babylonia).”

The ideology behind urbanization is not necessarily new, but the race towards megacities is relatively a new idea: “During the 1800’s only 3% of the world’s population lived in cities, a figure that rose to 47% by the end of the twentieth century. In 1950, there were 83 cities with populations exceeding one million; by 2007, this number had risen to 468. The UN forecasts that today’s urban population of 3.2 billion will rise to nearly 5 billion by 2030 when three out of five people will live in cities.”

That stark increase is being driven by technology and totalitarian ideology. Confined by the walls of a city, and controlled by the technology therein, mankind has to wake up to the current agenda of urbanization.

The Global Cities Initiative, The 2030 Agenda, and The Army.

The bankers of the world are actively pushing the Megacity agenda, while the UN develops goals to support it, and the army figures out how to control it.

The following joint report from The Brookings Institute and J.P Morgan Chase further proves how and what the governments and institutions of the world are going to do to prepare and control megacities.

Recently the Army also released a report stating that they are unprepared for the rise of megacity turmoil; but, as the institute’s report shows, specifically in the following graph, the growth of megacities, emerging gateways, and middleweights – the world is moving inwards and rather quickly. 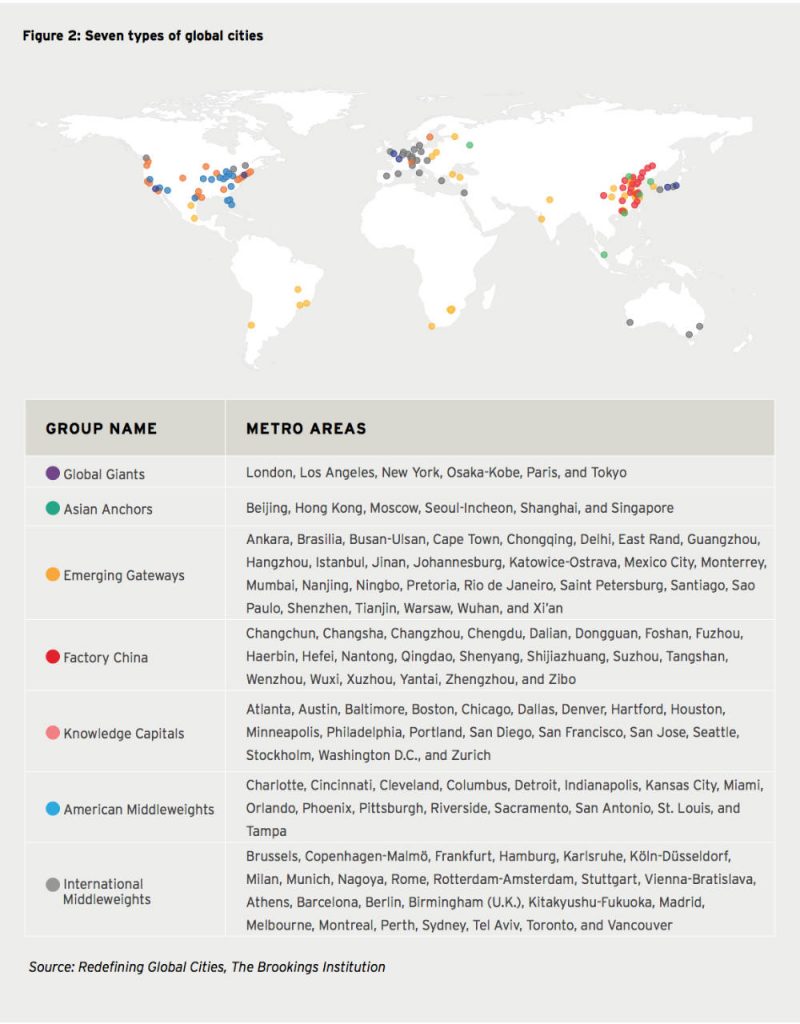 However, under goal nine and eleven of the Sustainable Development agenda – we can see that the infrastructure for these cities has yet actually to be developed, meaning that major reconstruction for megacities is about to begin.

Construction coupled with technology; these cities will be a totalitarian’s haven for surveillance. The latest technology, such as facial recognition, artificial intelligence, smart street lights, drones, and so on; by itself in country areas has minimal effect, but in cities vast amounts of data can be attained on every single citizen. Not to mention, the reality that Tim Allen describes in an interview with Jimmy Kimmel.

If the government dispatched vehicles with cameras on them, there would be riots in the streets, but when Google develops a new phone, people smile and wave and take pictures. – Tim Allen

The same ideology is being wrapped into the development of megacities; the UN and several other organizations are using convince as a weapon and deploying it against the privacy and safety of everyday people.

To top that off, in a megacity world, built by the military-industrial complex, the bankers, the UN, and ‘special interest groups,’ monitoring and controlling the citizenry would be simple. Through the emerging technology deployed to cities, the government’s level of control can only be described as a police state on steroids, and a mirror of Nazi Germany.