The Christian Journal
Home The Turning Point America is Falling: Record Few Americans Believe the Bible is the Literal...

Fewer than one in four Americans now believe that the Word of God, the Bible, is the literal Word of God. That number is similar to the 26% who view it as “a book of fables, legends, history and moral precepts recorded by man.”

The disbelief is record breaking according to the Gallup-polls four-decade trend that biblical literalism has not surpassed biblical skepticism. Even further, about half of Americans — a proportion largely unchanged over the years — fall in the middle, saying the Bible is the inspired word of God but that not all of it should be taken literally.

The Gallup poll showcases that only 24% of Americans believe that the Bible is the literal Word of God. 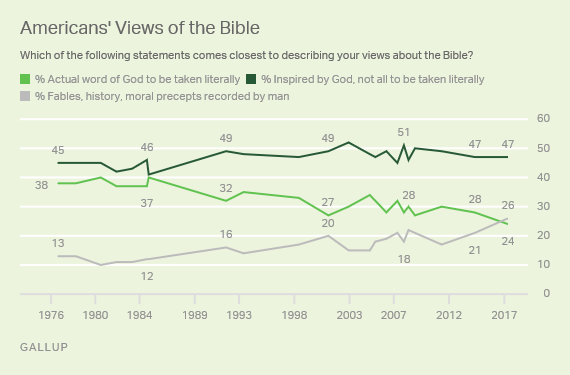 The gallup poll is evidence that the American education system, culture, and the cabal have infiltrated the youth and are actively swaying the populace of America towards satanism.

However, what else the poll shows is that Churches in America are no longer preaching that the Bible is to be taken literally, rather the churches are teaching that you can cherry pick scripture. For that, God says in scripture that He will spit them out.

16 Therefore because thou art lukewarm, and neither cold nor hot, it will come to pass, that I shall spew thee out of my mouth.

Astonishingly, the percentage defining the Bible as mere stories has doubled, with much of that change occurring in the past three years.

The Bible is the Word of God and culture is against the Bible, the majority of Americans are being swayed by devil worshiping icons of culture such as Katy Perry, and other cultic idols which the Bible specifically warns against following.

Putting all the pieces together from the indoctrination taught in schools to the culture wars being waged, and to the pastors being bought and paid for, it is no wonder that America is falling.

LET God be true and every man a liar.

Or maybe education and information has rendered mythology and superstition irrelevant?

Katy Perry “Sold her Soul to the Devil” and So Badly...