Imagine a world where you no longer need to communicate directly with an individual to understand their emotions. Instead, you would just consult with your personal wireless EQ-Radio to get a readout of their emotions, measured by their heartbeat and breathing patterns. Or imagine a world where the government, corporations, Facebook, Google, and other conglomerations can all know your emotions because you own a smartphone equipped with an EQ radio device.

A team of researchers at MIT’s Computer Science and Artificial Intelligence Lab (CSAIL) have developed a device which can read heartbeats and breath; in turn to decipher emotions. The device uses wireless signals, just like a home wireless router, to determine emotions.

The device measures subtle changes in breathing and heart rhythms; EQ-Radio is 87 percent accurate at detecting if a person is excited, happy, angry or sad — and can do so without on-body sensors. The device records the waveforms within each heartbeat and studies the waveforms to match a person’s behavior to how they previously acted in one of the four emotion-states.

“Our work shows that wireless signals can capture information about human behavior that is not always visible to the naked eye,” says Katabi, who co-wrote a paper on the topic with PhD students Mingmin Zhao and Fadel Adib. “We believe that our results could pave the way for future technologies that could help monitor and diagnose conditions like depression and anxiety.”

Interestingly enough there is plenty of Big Business involved. Dina Katabi envisions the system being used in entertainment, consumer behavior, and health care. Film studios and advertisers could test viewers’ reactions in real-time, while smart homes could use information about your mood to adjust the heating or suggest that you get some fresh air. 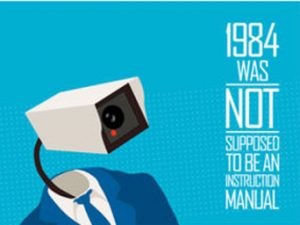 Tracking, recording, targeting, and triggering all of which advertisement companies use to infiltrate your mind and influence a decision which would “make” you buy their products. This is one example of how advertisers could use this technology to better their marketing and targeting.

However, if the government were to get their hands on such technology, here comes the thought police. Based on your previously recorded actions, within a particular emotional state; the EQ device could read your emotions and tell when you are likely to ‘strike’ next. Meaning that the government could unlawfully act on the grounds of thought policing.

The EQ-Radio builds on Katabi’s ideology of using wireless technology to measure human behaviors such as breathing and falling. Katabi will incorporate emotion-detection into her spinoff company Emerald, which makes a device that is aimed at detecting and predicting falls among the elderly. Her company, Emerald, was featured at the White House Demo Day on August 4th, 2016 which showcases grounds for a political agenda and funding.

The government has long sought devices and technology which can track, record, and monitor the citizenry. The EQ device is yet another tool that can be added to their arsenal to wage war against humanity and privacy.