The ultimate future of money has yet to be seen, however, the truth is, that it is already known. The mark of the beast will undoubtedly be coming about over the course of the next few years. A cashless society where individuals pay for goods and services via the use of a microchip implanted in their hands is the future of money. A virtual reality where there are no physical possessions, only fantasies of the darkest minds.

The recent advancements in technology allow the use of such microchips for commerce, however sales end points around America lack sufficient technologies to accept microchips. This will undoubtedly change over the course of the next few years.

Charlie Warzel, the man, portrayed in the video as accepting the mark of the beast willingly, has “apparently” no clue what he is doing. As he stated, “his plan was to live for a month paying for everything with his phone, but somewhere along the line he decided to accept a microchip into his hand.” 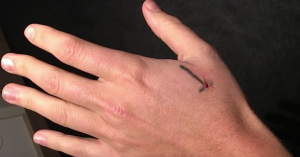 His goal was to be the first person in the real world to use a microchip to buy and sell, or in his words “just his hand.” Using a phone as payment is called a proximity mobile payment, and the estimate for the year 2016 is that $27 Billion dollars will be spent by individuals just using their phones.

What is not told, however, is how that number will rise and drastically. The good news is that most companies in the US have not yet started accepting payments by phone; the bad news is that it is becoming a trend and will very quickly become the new way to pay for everything.

Charlie then heads to Sweden. Sweden is far ahead of the United States in regards to a cashless society; Sweden is on track to be the first cashless society around the world. Upon entering Sweden is when Charlie implanted the chip. After getting the chip, there are obvious visible changes in the man.

After the chip was implanted Charlie became the first person to pay for a meal with his hand. How it came to be was that the beast’s chip implanted inside of Charlie was integrated into an application. Just like those which millions of individual use on their phones each and every single day.

Charlie estimates that within the next ten years it will be abnormal to carry around a wallet. Instead, technology will be vastly integrated into how we buy and sell; effectively bringing about the Mark of the Beast.

The reality is, modern man has no idea what this world is really comprised of. Modern man is too busy in the dream world, which is why Mark of the Beast technology will come about very quickly, and no man shall buy or sell unless he has the mark of the beast.

Technology is and always has been a part of the elites agenda to modify mankind. Making men weak and lazy, rather than self-reliant and independent. Our society has molded into a utopia which nearly mimics that of the Brave New World, or that which is spoken of in the Bible during the end times.

What is known as the future of money, is also the death of real currency. Anyone with their eyes open knows that the government of the USA is printing too much money to sustain this society. So a rapid change to a cashless society which digitizes all assets would be rather appealing to those in power. The common man will have no real wealth, but the Elite will.

The Mark of the Beast as mentioned in Revelation 13:16:

16 [a]And he made all, both small and great, rich and poor, free and bond, to receive [b]a [c]mark in their right hand or in their foreheads.

With the Geneva version the authors had footnotes which further describe the mark:
Footnotes:

A. Revelation 13:16 The third place, is a most wicked and most insolent tyrrany as was said before, usurped over the persons of men in this verse: and over their goods and actions, in the next verse. For he is said, both to bring upon all persons a tyrannous servitude, that as bondslaves they might serve the beast: and also to exercise over all their goods and actions, a peddler-like abuse of indulgences and dispensations (as they term them) amongst their friends, and against others to use most violent interdictions, and to shoot out cursings, even in natural and civil, private and public contracts, wherein all good faith ought to have place.
B. Revelation 13:16 That is, their Chrism, by which in the Sacrament (as they call it) of Confirmation, they make servile unto themselves, the persons and doings of men, signing them in their forehead and hands: and as for the sign left by Christ (of which Rev. 7:3) and the holy Sacrament of Baptism they make as void. For whom Christ hath joined unto himself by Baptism, this beast maketh challenge unto them by her greasy Chrism, which he doubteth not to prefer over Baptism, both in authority and efficacy.
C. Revelation 13:16 The mark of the name of the beast.

All of which sums up the Mark of the Beast just as it will come about, through bondslaves and tyranny. Which is exactly what is going on in America and around the world at this very moment.