A new intelligence report warns of an ‘increase in risk’ of conflict between and within nations over the next five years. The report states that risk will increase to levels not seen since the Cold War. 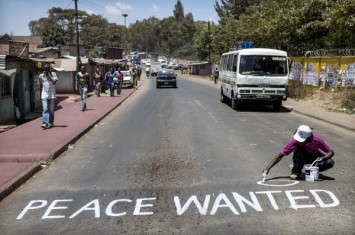 According to the report, we are living in a paradox, and the post-World War Two Order is eroding. The report also states that the increased risk is because global growth is slowing, and anti-globalization is fueling nationalism.

“These trends will converge at an unprecedented pace to make governing and cooperation harder and to change the nature of power – fundamentally altering the global landscape,” said “Global Trends: Paradox of Progress,” the sixth in a series of quadrennial studies by the U.S. National Intelligence Council.

The study (seen below) outlines a “dark and difficult near future,” because both China and Russia increasingly becoming assertive on the World Stage, regional conflicts, terrorism, rising income inequality, climate change and sluggish economic growth.

The Global Trends report is published every four years by the National Intelligence Council, and usually, the NIC deliberately avoids analyzing U.S. policies or choices. However, the latest study underscored the complex difficulties Trump must address to fulfill his vows to improve relations with Russia, level the economic playing field with China, and return jobs to the United States and defeat terrorism.

The current world order has reached the phase of multipolarity, and with that comes severe increase of risk. As predicted by other intelligence agencies in 2008, the world will be entirely multipolar by 2025; the following is an explanation of the phases.

The United States surfaced as the sole dominating power in world politics as there were no real challengers to their hegemonic position. This allowed greater room for the superpower to maneuver and to get involved in international issues that not necessarily coincided with national interest. We can describe this new political situation as being unipolar.

Phase Three – Multipolarity (We Are Here, still under construction)

(Brief Explanation) — After the collapse of the short-lived multipolar world which led to World War Three, a new world will commence. That international order would be the return of an oligarchy, or in other words, the world would be centralized under a single governance. Under this New World Order, there would be no borders, a single currency, a single religion, operated under highly advanced technology (Artificial Intelligence). This is the world order the cabalists are developing.

A brief summary of the 2017 Global Trends Report.

We are living a paradox: The achievements of the industrial and information ages are shaping a world to come that is both more dangerous and richer with opportunity than ever before. Whether promise or peril prevails will turn on the choices of humankind.

The progress of the past decades is historic—connecting people, empowering individuals, groups, and states, and lifting a billion people out of poverty in the process. But this same progress also spawned shocks like the Arab Spring, the 2008 Global Financial Crisis, and the global rise of populist, anti-establishment politics. These shocks reveal how fragile the achievements have been, underscoring deep shifts in the global landscape that portend a dark and difficult near future.

The next five years will see rising tensions within and between countries. Global growth will slow, just as increasingly complex global challenges impend. An ever-widening range of states, organizations, and empowered individuals will shape geopolitics. For better and worse, the emerging global landscape is drawing to a close an era of American dominance following the Cold War. So, too, perhaps is the rules-based international order that emerged after World War II. It will be much harder to cooperate internationally and govern in ways publics expect. Veto players will threaten to block collaboration at every turn, while information “echo chambers” will reinforce countless competing realities, undermining shared understandings of world events. – Read More

As the Old World Order increasingly becomes unstable; alliances will shift, civil strife will increase which could and will lead to global conflict. The Bible is rather clear in regards to this period, in Matthew 24:6 it is clearly written that there shall be wars and rumors of wars.

6 And ye shall hear of wars, and rumors of wars: see that ye be not troubled: for all these things must come to pass, but the end is not yet.

According to the Global Trends report, it is increasingly evident that over the next several years conflict is going to be ripe within countries around the world. In addition to such, the Second Cold War is not over because Trump is in office, rather it’s just beginning.

the new world order and the people behind it, are controlling us with fake news video games and everything else they have… humanity is doomed… Read more »

Check out this article

Cord-cutter alert: YouTube’s Unplugged could be right around the corner
http://www.salon.com/2017/01/11/cord-cutter-alert-youtubes-unplugged-could-be-right-around-the-corner/

The USA Just About Began World War Three in Syria This...

Has Russia Just Changed The Future Of Warfare Completely, And Rendered...

Beyond Symbolic: Rivers of Blood, Streets of Dhaka After Islamic Eid...