Communist groups are planning an armed revolt against who they perceive as their enemies, “right-leaning forces.”

Broadcast to over five thousand like-minded persons, was the question by the co-host, Dr. Bones; “Hey quick little question for military-minded lefties: should leftists train/organize in a ‘insurgent’ focus where they blend into a civilian population for potential attacks or a more ‘militia’ structure focused on holding/maintaining turf?”

Bones questioned his audience on their popular podcast called ‘The Guillotine,’ which is a podcast that covers ‘global current events from a revolutionary communist and anarchist perspective.’

Remarkably, the show has over 15,000 Facebook followers and 250 active Patreon donors per month. The two co-hosts, @Ole_Bonsey and @DeadIrishRebel self identify as an “egoist-Communist” and “Marxist” respectively and based on the activity on their social media accounts they appear to be supporters of mass murdering Communist dictators and “revolutionaries” like Mao Zedong and Che Guevera.

The co-host later suggested on Twitter after posing the initial question relating to their groups focus, that they should organize as “hidden cells.” Furthermore, recognizing that the South would outgun their advances, the co-host then suggests that once the Right takes control, they should ‘bleed them dry.’

In response to the question posed by Bones, some of the Communist extremist’s followers suggested that they should prioritize “having a common language and tactics is unbelievably important in future situations where your five-person cell has an opportunity for a big kill”

Another follower stated the importance of being able to blend in and suggested the importance of only attacking in battles you can win. Further, the individual who claimed such, previously indicated that he/she would be willing to pay someone to assassinate President Trump.

The alarming language posted to Twitter, does not appear to break the law, however, granted that Antifa, a like-minded group, has been radically active, such talk should not be taken lightly. 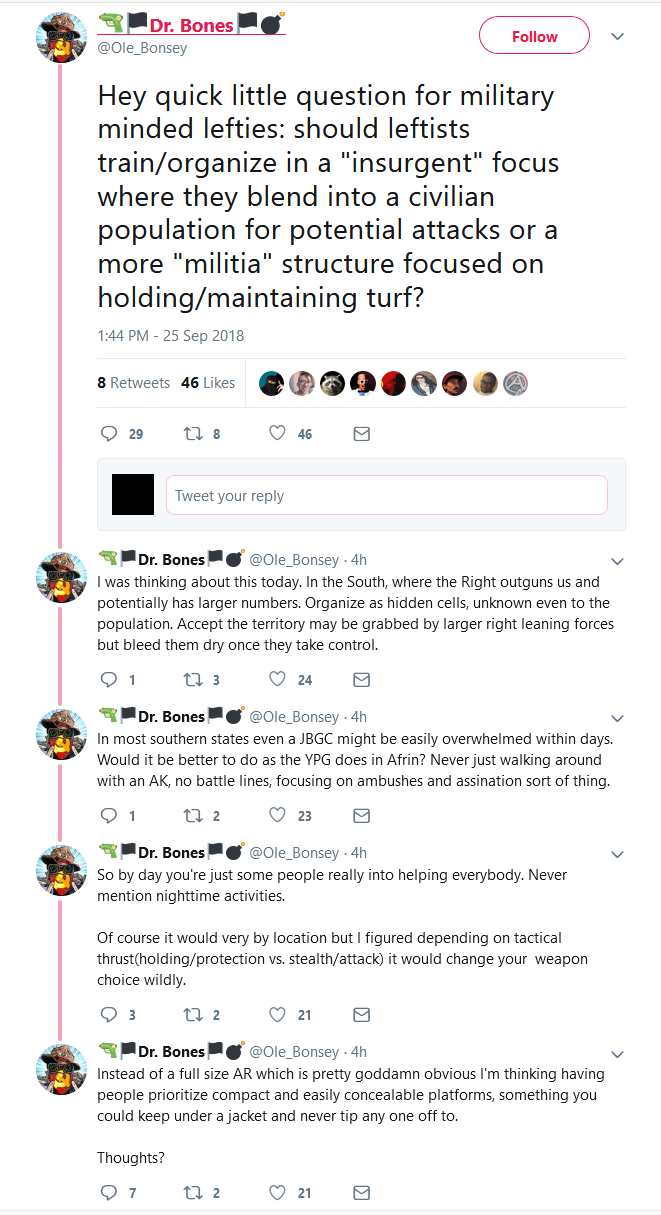