Make no mistake Artificial Intelligence will rob you of your house, car, life, job, and so on because, according to experts, in as little as 45 years AI will be better at doing everything you do.

A new survey was taken Katja Grace from Oxford’s Future of Humanity Institute who led a team to interview 352 academics about the future of artificial intelligence.

In as little as 25 years, up to 47% of all jobs will have been taken over by technology, leaving vast amounts of people without work. However, the chances are that this number could be much higher because of the speed that AI can be developed.

The team calculated the answers from academics, taking the median responses they came up with some concrete numbers.

In ten years, AI will do better than humans in translating languages (by 2024), writing high-school-level essays (by 2026), writing top 40 songs (by 2028) and driving trucks, folding laundry by 2022, everything is within the foreseeable future and that is daunting given the reality that without work, there can be no income, without income there can be no housing and so on.

AI-driven machines will be in retail by 2031, by 2049, AI will be authoring New York Times bestsellers and performing surgeries by 2053. Overall, AI could be better than humans at nearly everything in about 45 years.

The team of researchers authored a chart, and only time will tell its accuracy; 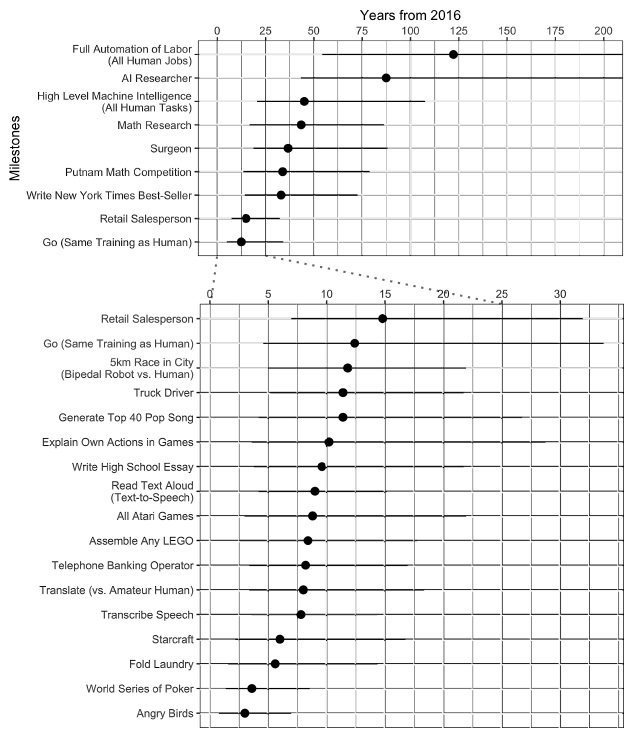 As you can see, artificial intelligence will rob you of your house, car, life, job, and so on, but those numbers are in large part not accounting for where the job market is heading already. Instead of a diverse field of work, companies are already looking for software engineers rather than machine operators.

It is crucial to note that the entire timeline for the AI takeover is up in the air because; as an MIT Technology Review points out, these predictions have a way of coming earlier. AI wasn’t supposed to beat humans at the game of Go until 2027, and that happened back in 2015.

Incredibly, this is what the elite are planning for the future of mankind. However, it goes much deeper than that, a nefarious agenda based on a historical point of view proves that nothing is new under the sun. In a society of elitists, the problem always is that once the divide between workers and employers gets too big it becomes unstable. Not enough of the workers can afford to do anything – leading to a societal collapse, meaning that the elitists can’t maintain their businesses. In other words, AI takes care of all of that by replacing those pesky workers.