At least three people were killed and multiple others were hospitalized Wednesday in an “active shooter” situation involving up to three suspects at a social services facility east of Los Angeles. 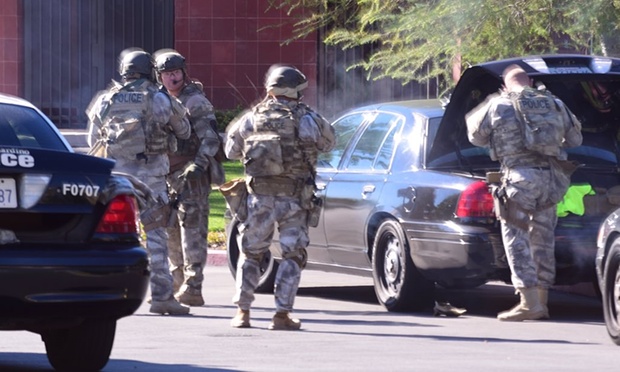 The shooting was reported inside a center that serves people with developmental disabilities in the 1300 block of S. Waterman Avenue in San Bernardino (map), said Lt. Richard Lawhead of the San Bernardino Police Department.

Up to three people were suspected in the shooting, San Bernardino County sheriff’s officials said. Multiple agencies, including the FBI and ATF, were assisting with the investigation.

Images from the scene showed law enforcement personnel armed with rifles and wearing protective gear fanning out across the area, as emergency responders treated multiple victims in the street.

Officials did not say how many people were killed or wounded. An initial tweet from the San Bernardino Fire Department said 20 victims had been reported. Authorities confirmed fatalities, and an NBC Los Angeles crew saw at least three bodies at the scene.

“They were being carried on trucks … They were shot, they were injured. Some of them did not survive,” said NBC Los Angeles reporter Tony Shin, describing victims he saw being brought to the triage area.