Mysterious giant coffins discovered in Egypt in 2012, may prove the existence of the Biblical Nephilim, and the discovery of said tombs further confirms the historical happening of the great Biblical flood.

The 24 boxes, or tombs, were re-discovered in Egypt in 2012, and they were once originally discovered by Ramesses II some 3300 years ago. The mainstream theory regarding the boxes is that Ramesses II built the burial site, but it is more likely that the early Egyptians only discovered this burial site. Just how could the Egyptians move over 24 tombs that weigh roughly 100 tons each?

Some experts are claiming that the Egyptians did not build these boxes, but rather, they were left on Earth by ‘aliens.’ Interestingly enough, that actually makes more sense than the mainstream theory, that the Egyptians built these tombs with copper hand tools.

The head of Egyptian archeology when announcing the discovery to mainstream media, instead of flat out lying, stated that they don’t know how the Egyptians created the tombs. The tombs are unique because of the angles, the skillfulness of the stone cutting is accurate to just a few microns.

Looking through the history, before the Egyptian worship of the Apis bulls is the actual origin of the deity. 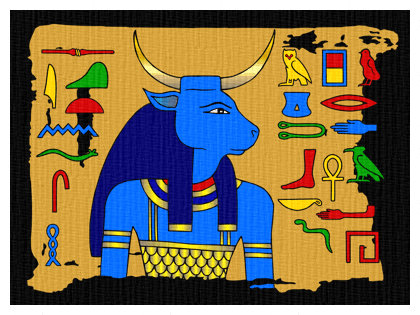 The Apis deity, to the early Egyptians, was regarded as a half human, half bull being; and was the god of strength and fertility.

The timeline, given that it is more likely that a son of Ramesses II, Khaemweset, only discovered the tombs and ordered them to be buried within the Serapeum of Saqqara; it is probable that the black boxes were for the Nephilim which predate Ramesses II’s 19th dynasty.

The Biblical time period could place the origin of these boxes to pre-flood. Meaning that from creation to roughly 2166 BC, the Nephilim walked the Earth, and the Giants as they were in stature, made men look like grasshoppers in their sight (Numbers 13:33).

The Nephilim, are the spawns of the daughters of men and the sons of God, meaning that the Nephilim were half human and half angelic. The spawns were mutant in appearance, they were giant, and had six fingers and six toes (1 Chronicles 20:6). Given that God cursed the Nephilim, to only walk the earth 500 years (1 Enoch 10:9,10), it is probable that God also cursed them with deformities, as the bloodline thinned, as is apparent with genetic cranial deformation.

Besides the reality that these giants walked the Earth, there is still no explanation for the creature-like appearance as seen in Egyptian and Greek mythology. However, given the mythology of the ancients, it is probable that chimeras walked the earth as well in those days because of the constant DNA manipulation, brought on by the Nephilim and the fallen, into the daughters of men. This of course, is why God wiped the Earth with a flood.

Bull worship was apparent at the Exodus.

As time went on Egyptian worship of the Apis bull continued and can be seen even in the Exodus of Israel. When God was giving the commandments to Moses, Aaron, and the soon-to-be Israel were creating a golden calf (Exodus 32). Being that the people of Israel had just left Egypt, it is evident how strong the influence of Egypt and cow worship was upon the early Israelites.

Given that there is literally no explanation as to how the boxes originated, how they were created, there is still a massive mystery surrounding the 2012 rediscovery of the tombs. However, the evidence that this Serapeum was just for Apis bulls is lacking, which opens the possibility that these tombs could have been the tombs of the Nephilim. What say you reader?