The LGBT community has been associated with pedophilia and they have tried to shake this stigma, but in 2019 they have given us a lot of reasons to keep the association between homosexuality and pedophilia.

Desmond Napoles, better known as Desmond is amazing is an 11 year old drag kid who is heralded as the future of the lgbt community. Desmond has been seen dancing in a gay bar, stripping for dollars, he was caught on video sniffing his arm while a Drag Queen talks about doing Ketamine on a couch and now we have this blog post written by a pro pedophile activist where he refers to Desmond as

“I am a sexy kid, with sexy feelings. It’s totally cool for grown-ups to get turned on by me. I love it. That’s why I do this stuff. It’s great. It’s fun. It’s me!” See More 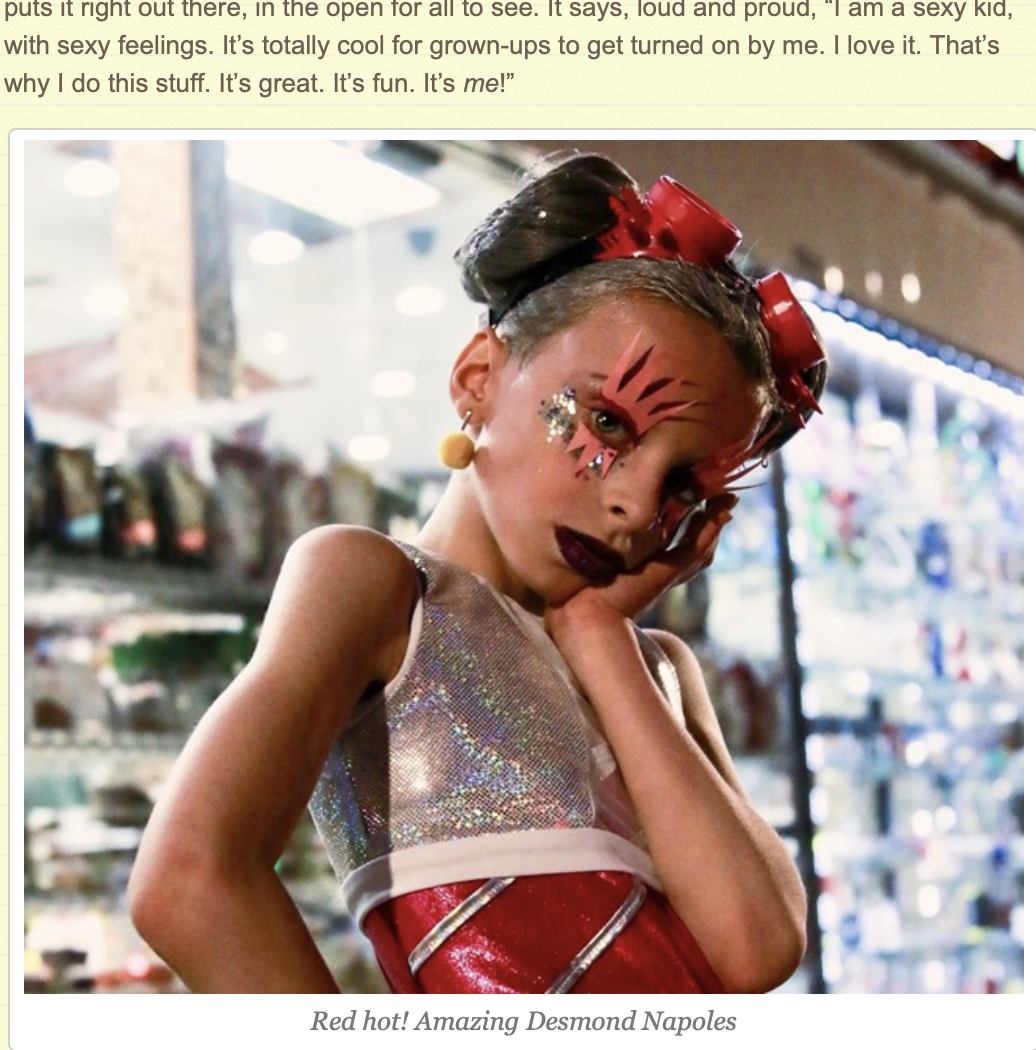 There is nothing sexy about an 11 year old, and this is just further proof of the march to normalizing pedophilia. Drag Queens seem to be the catalyst that is pushing this sick demented agenda forward. There is almost no condemnation from there same group of people who “hate” being stereotyped as pedophiles.

Drag Queens are men who dress as hyper sexualized men and are dancing like strippers in from of children (see here). The lgbt community and their supporters promote this deviant lifestyle to children and children like Desmond are being used to further this agenda.

How many more examples of children being sexualized do we need to see before we decide we’ve had enough of this? “Drag Kids” posing with naked adult Drag queens, 9 year olds dancing in bars, etc.

Christians, and the rest of the world for that matter can not turn a blind eye to this any longer. We can not be reactionary because it will be too late. We need to be proactive at stopping this agenda, it’s obvious and it can not be denied. They are coming for your children!! If you do nothing your children will be recruited to be sexualized and used as sex objects for homosexuals.

This fact is particularly disturbing. Homosexuals comprise just two percent of the population, yet are responsible for 33% of all child sexual abuse. They offend against children at 16 times the rate of the normal population. See More

We tried warning you that this was coming and you can try and ignore it all you like but pedophilia is here and there is only one group of people promoting it and thats the lgbt community.

Guess that slippery slope wasn’t so slippery was it?

The blog post about Desmond was written by Thomas “Tom” Victor O’Carroll (born 1945) who is an Irish homosexual and “gay” rights activist convicted of pedophile offences. His career and his writings provide strong evidence for the close connection, indeed inseparability of homosexuality and pedophilia and also for the connection between the homosexual/pedophile movement and academia.