A Wrinkle in Time was released in theaters February 26th, but it has not been receiving the kind of attention that was likely expected or hoped for. This movie is an adaptation from a book of the same name first published in 1962 by Madeleine L’Engle. While the book was written with a lot of Christian undertones, the film directed by Ava DuVernay does not carry the same Christian message. This has ignited much talk about the appropriateness of this magically fueled film for young Christian filmgoers. God has warned us to not be deceived. This is a good example of that.

Another topic that has caused a bit of talk is that Disney has partnered with Christian Resources to create a Bible study to go with the film that includes video lesson film clips, a three part study, and an advertising poster. Many are questioning the intention of Disney with this study due to the fact that Disney intentionally erased the Christian themes and scripture from the film in the first place. What kind of “Bible study” is this? 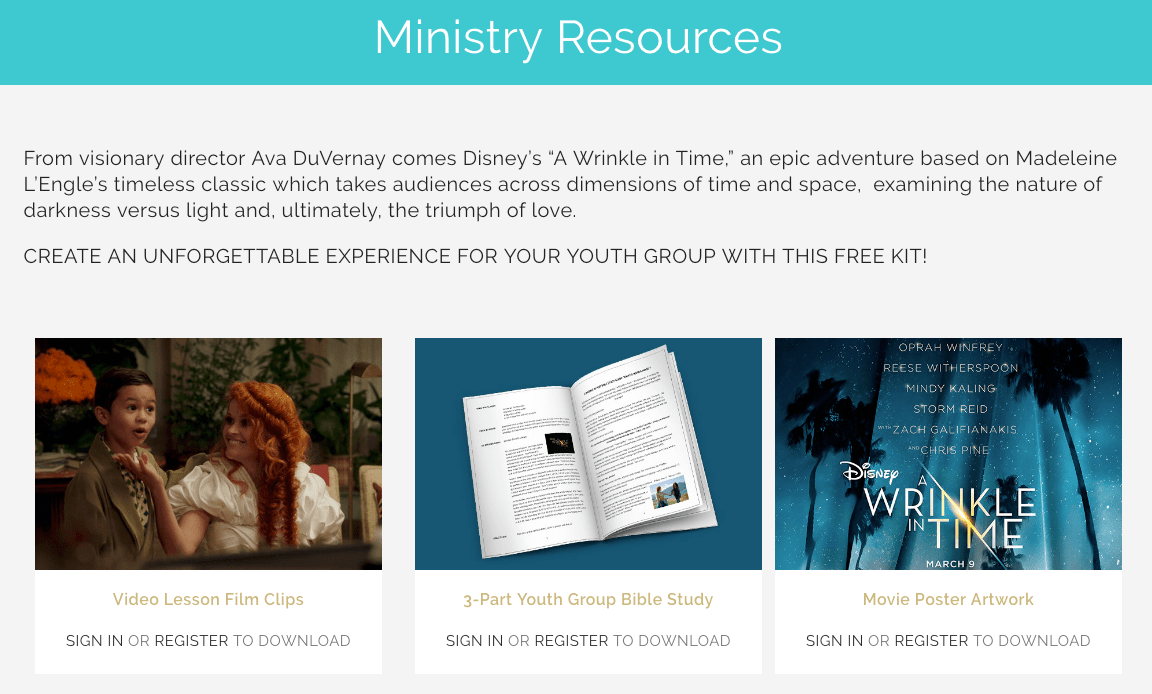 It’s as if Disney is trying to pacify the Christian world after deliberately taking scripture out of the movie. Jennifer Lee, the screenwriter for this film, admits that she intentionally omitted the more Christian content because she believes that society has “progressed” since the writing of the book. She also stated that the elements L’Engle wrote about with regards to faith and scripture really don’t need attention anymore. Movieguide explains this further in their recent article found here. This concept is a little frightening to say the least! To believe we as a society don’t need the teachings of Jesus any longer, because we have progressed is completely ridiculous! The fact that Disney is now supporting gay and lesbian characters and recent talk of Elsa having a girlfriend in Frozen 2, goes to show that this is the last Bible study we would want in our children’s hands. Oprah has also repeatedly stated that she believes there are many ways to Heaven and God. The fact that she’s a main character in this film raised a red flag immediately.

Somehow the release of this Bible study feels less like actual concern for keeping consistent with the original theme of the story and more like a marketing scheme to get Christian families and youth groups to buy tickets. The biggest issue with the study is that the motivation behind it is a manipulation. Disney, a company that continually removes all evidence of God in most films, is co-releasing a Bible study, not to draw people to the Lord, but to draw people to theaters! The purpose for reading scripture and spending time with the Lord should be motivated by a desire to know Him, NOT to sell movie tickets.

The movie follows the story of Meg Murray, a kind but troubled and insecure teenage girl, whose father mysteriously disappeared 4 years ago. She is transported by three magic women through time and space with her brother, Charles Wallace, and friend, Calvin, to rescue her father from an evil force called “The IT,” that has imprisoned him on another planet. Our heroine, Meg, must work to overcome her insecurities and anxieties to save the universe and rescue her father. “The IT” is a great dark force but the Murray family has the power of “love” that is stronger than the darkest force of evil.

The mystically spiritual side of this movie is disconcerting, still, the theme of light overcoming darkness is good. Young adults learning to believe in themselves and their significance in the world is an important lesson. Although, this lesson can be learned without seeing a movie with these spiritual connotations leading people astray. God warns us to steer clear of any mysticism and new age beliefs.

Should I See This Movie?

This is an important question and, sadly, one that is not asked often enough. Bottom line: there ARE some pushes towards new age spirituality!

The truth is parents should pray and use discernment with any movie, music or television show they allow their children to be entertained by. Compare the content in media with what God says is ok to ingest. It’s critical to teach our children the process of discerning different forms of media. We can’t just tell our kids they’re not allowed to watch something. It’s important to explain the “why” of the situation and also equip them to use their own discernment going forward. If children are shown this process, they will be more likely to default to it when mom and dad are not around. Which is what our goal should be as parents in the first place. Train our children up in the way they should go so that they will not depart from it!

If you’re wanting to do a pop culture purge in your home and replace any games that do not line up with your family values, text the words MEDIAGUIDE (no spaces) to the number 44222 and you will be emailed a sweet Parent Media Guide loaded with positive entertainment options for your kids!

Nikki Newbold was the contributing writer for this article. Nikki is a worship leader, speaker and writer. She and her husband have two kids and live in Tennessee.