Drag Queen Story Hours, happening with increasing frequency all across the U.S in libraries, schools and bookstores, are touted as “captur[ing] the imagination and play of the gender fluidity of childhood and gives kids glamorous, positive, and unabashedly queer role models.”

Warriors for Christ and Mass Resistance as well as other concerned citizens and parents are shining the light of truth on what these events are truly about and the backgrounds of the individuals who are exposing their wicked lifestyles to innocent children.

On Friday, March 15, from information obtained by Tracy Shannon, KHOU in Houston reported that the Houston Public Library had a registered child sex offender read stories to children on March 30 as part of their ongoing Drag Queen Story Time program.

It’s been discovered that Alberto Alfonso Garza, 32, was convicted in 2009 of aggravated sexual assault of a child. The boy was 8 years old. Garza, who lives as a transgender, also has a drag queen persona called Tatiana Mala Nina. Sadly, Garza was part of the drag queen story time reading at the Houston Library on September 29, 2018. 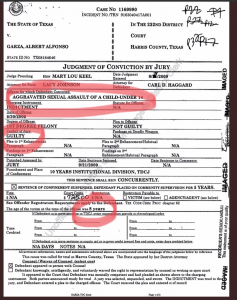 The library issued a statement of apology and said “We failed to complete a background check as required by our own guidelines. We deeply regret this oversight”. The HPL also stated that Garza will not be part of any future programs.

KHOU reported that in December, Tracy Shannon with assistance from SafeLibraries®, a library watchdog organization, sent the HPL freedom of information requests to find the identities, and other details, of the drag queens scheduled to read to children. When the HPL did not comply, the Texas Attorney General stepped in to force the HPL to release the requested information.

Warriors for Christ as well as several other groups have been warning for months that Drag Queen Story Time is nothing more than a recruitment tool for children into the LGBT lifestyle.

In light of the shocking, not shocking, information discovered about Garza, SafeLibraries® has sent another FOIA request to HPL.

This revelation comes on the heels of a recent lawsuit filed in October to stop Drag Queen Story Hour in Houston. In January, Chief U.S. District Judge Lee H. Rosenthal issued a ruling to grant the city’s request to terminate the lawsuit stating that the plaintiff’s did not have standing and they failed to establish that the freedom of religion clause outlined in the suit had been violated by the program. The plaintiff’s are appealing Judge Rosenthal’s decision.

It’s past time for pedophiles, perverts and woefully misguided men outrageously dressed as women to expose our children to their gender confusion and sinful lifestyle. Hopefully this event is a call to action to all of us who honor God’s word.