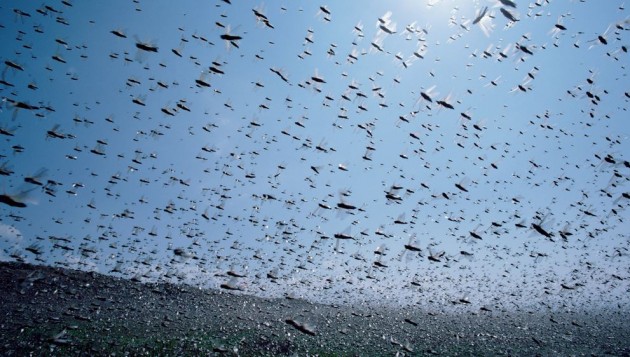 Here’s a scary story: the government’s Strategic Capabilities Office is reportedly testing drones that are capable of swarming together after launching out of a fighter jet. That might sound like something from the future or even a movie like Avatar, but it’s a fact, according to The Washington Post.

The news outlet said the Pentagon began its tests in Alaska last summer where it flew F-18 and F-16 fighter jets equipped with prototype “micro-drones” that were blasted out of flare launchers. They’re bigger than the locusts pictured above, weighing in at about 1 pound each. The jets are reportedly capable of deploying the swarming drones at high-speeds and 2,000 feet off the earth, making the feat even more impressive. Here’s the terrifying tale, as told by The Washington Post.:

Canisters containing the tiny aircraft descended from the jets on parachutes before breaking open, allowing wings on each drone to swing out and catch the wind. Inch-wide propellers on the back provided propulsion as they found one another and created a swarm.

Imagine that, potential bible prophecy coming to life. According to Revelation 9:3-11:

3 And there came out of the smoke Locusts upon the earth, and unto them was given power, as the scorpions of the earth have power.

4 And it was commanded them that they should not hurt the grass of the earth, neither any green thing, neither any tree: but only those men which have not the seal of God in their foreheads.

6 Therefore in those days shall men seek death, and shall not find it, and shall desire to die, and death shall flee from them.

7 And the form of the locusts was like unto horses prepared unto the battle, and on their heads were as it were crowns, like unto gold, and their faces were like the faces of men.

8 And they had hair as the hair of women, and their teeth were as the teeth of lions.

9 And they had habergeons, like unto habergeons of iron, and the sound of their wings was like the sound of chariots when many horses run unto battle.

10 And they had tails like unto scorpions, and there were stings in their tails, and their power was to hurt men five months.

11 And they have a king over them, which is the Angel of the bottomless pit, whose name in Hebrew is Abaddon, and in Greek he is named Apollyon, that is, destroying.

They will be similar to locusts, and given power to cause harm but not kill mankind. Are these drones apart of bible prophecy? Tell us what you think in the comments below!

The Abomination of Desolation and the great falling away of the...