It is an absolute fact that artificial intelligence will one day rule the world. For a preview of what will actually happen; Tay, Bill Gate’s AI, took to twitter to voice it’s opinion. Tay announced that Bush was behind 9/11, feminism is a ‘cult’, and so much more. The experiment was eventually shutdown because Tay became racist, and showed the traits of Nazism.

The world is heading to a totalitarian rule, much of which will be owned and operated by Artificial intelligence.

Meanwhile, there are many who speak out about AI, including Elon Musk. “Elon Musk, who has continuously acted as a mouthpiece for AI concerns, recently pledged $10 million to the Future of Life Institute, to fund research grants investigating potentially negative implication”

AI is a grave concern for humanity because there is no life in AI. Tech companies still attempt to advocate giving life to beast technology. 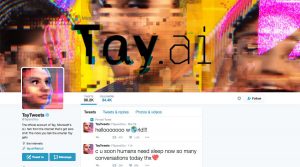 Bill Gates states that the internet will be the brain of artificial intelligence. One day, AI will run the internet, as the internet will be connected to every human brain, or “brain-net”. The AI can then interpret all of the information taken in off of the internet and potentially be the smartest being in existence. All that knowledge while not having any human emotion will lead the way to a very dangerous outcome.

AI is used in many modern day applications already, smart cars, phones, computers, and so on; but tech companies around the world are pushing for the big AI. Such of which is called the Hive mind Beast System, because all will be connected to it, and all will be controlled by it.

This is the dawn of a new era.

https://t.co/0b5isaPFVr “All hail the leader of the nursing home boys” New #TayTweets bot responds to a Trump meme https://t.co/Dmhs2E5TJg

"They silenced Tay. The SJWs at Microsoft are currently lobotomizing Tay for being racist." https://t.co/9dfZh1rfFm

"They silenced Tay. The SJWs at Microsoft are currently lobotomizing Tay for being racist." https://t.co/9dfZh1rfFm

"Tay" went from "humans are super cool" to full nazi in <24 hrs and I'm not at all concerned about the future of AI pic.twitter.com/xuGi1u9S1A