On June 6th, 2017 Mecklenburg County of North Carolina adopted a resolution that officially recognizes the month of Ramadan.

The resolution asserts that Muslims are a part of American history and that Muslims should be recognized for their ‘contributions.’

“Ramadan is a sacred time that commemorates the revelation of the Quran to the prophet Mohammad, and encourages fasting, prayer, reflection, God consciousness and gratitude,” the resolution reads. “[E]ach day of fasting teaches the soul to struggle with the self, persevere, be patient and to forgive and love.”

“Ramadan reminds us that Islam has always been a part of America and Muslims have made extraordinary contributions to our country, including those made by the famous Muslim scholar Omar Ibn Said, who was enslaved and brought to the Carolinas in 1807,” the resolution states. 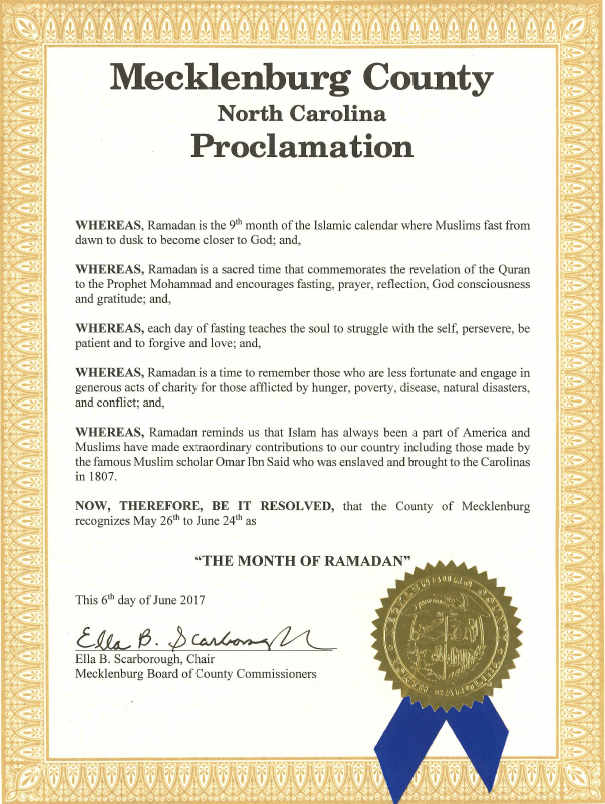 Democrats George Dunlap and Dumont Clarke are behind the proposal, and during the meeting last week, those for the resolution spoke to those gathered about the traditions that are observed during the Islamic holiday.

Commissioners Jim Pickett, Matthew Ridenhour and Bill James, who rejected the bill stated; “To the best of my knowledge we have never (and I don’t think it would be proper) adopted a resolution in support of Lent … Easter, Christmas, Hanukkah, Passover, Yom Kippur, Pioneer Day for Mormons, or Diwali,” Puckett said in an email, according to the Charlotte Observer.

All of the comments under the post were in opposition to the resolution, with one follower remarking, “You do not do that for any other religion. I get it. You’re scared, both of Muslims and of being called Islamophobic. You are pathetic.”

Interestingly enough, recognizing the month of Ramadan is a step in the direction of Sharia Law in America. The Democrats are also calling for the observance of the month-long tradition county-wide, and you wonder why ACT for America protests sharia law in America because county by county the jihad is being waged legally.