The Bristol Tennessee Deathscorts are at it again. Last week things on the sidewalk got physical, as usual. This time however the videos were posted to social media by the Deathscorts themselves, despite their unhinged violence being on display for public viewing.

The videos that were posted to social media came along with a very erroneous description of what they say happened. Their details only match up with half of what transpired and they expect others to believe their narrative even after watching the videos. The videos are disturbing but the assaults and the blatant lies show exactly how depraved the people who escort babies to their death truly are, however one  Deathscort in particular is more rabid then the others.

In this photo from September 4th, 2019, you see 64 year old Cheryl Wade Hanzlik, a once sharp Physics Professor and as hard as it is to believe, a STEM Role Model, who is now a retired senior citizen of Bristol, Virginia. Hanzlik can be seen holding a pink 20+ watt megaphone in each hand. At this moment she was blasting the siren sound that the megaphones make into the faces and ears of two street preachers who were not on clinic property but rather across the street, more than 50 feet away from the clinic. At no point did either of the street preachers cross the street to the clinics location. Despite there being no patients in the clinic at that time, Hanzlik still felt the need to come across the street to harass and attempt to blast out the eardrums of Rich Penkoski and Drew Silvernail. The megaphone wielding old timer actually makes a common practice of using the amplification devices as weapons of assault. 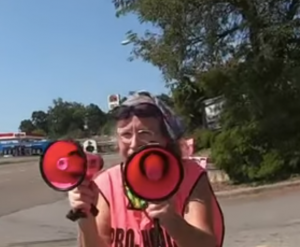 The harassment from Hanzlik has become more widespread, beyond the streets near the abortion clinic. Over a month after the men preached outside of the murder mill, Hanzlik tracked down Amanda Penkoski, the wife of one of the preachers on Facebook and began harassing her. Hanzlik’s online harassment is also a common occurrence and quite daunting actually, to the point where many people and pages on several different social media platforms are are blocking and banning her because of her compulsive online harassment. Some of the obsessive nature of her online molestation of Christians and Abolitionists has been documented by those being harassed. Some of the content was made available to the public and other content was provided to ChristianJournal exclusively, to bring awareness to the pure degeneracy of this golden-aged raving lunatic who stands close by as babies are assassinated just 30 feet away. Below is just a small compilation of Hanzlik’s obsessive and abusive online behavior within the last few weeks alone, with the exception of being previously banned from an abortion ministry page. Once Hanzlik was banned from A Cause For Christ‘s Facebook page in April, she began harassing the abortion ministry on their YouTube platform.

The comments Hanzlik left on A Cause For Christ’s YouTube video’s have been blocked out, as the content is offensive, crude, threatening and abusive. At one point Hanzlik threatens to bring a broom to the clinic to assault the Pro-Life advocates. 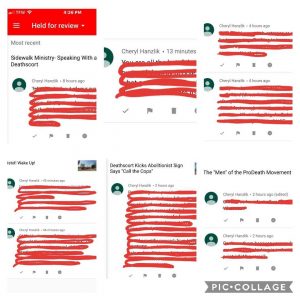 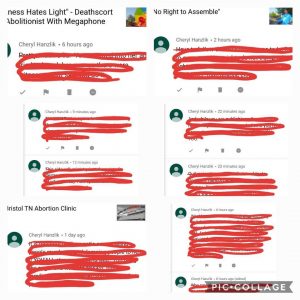 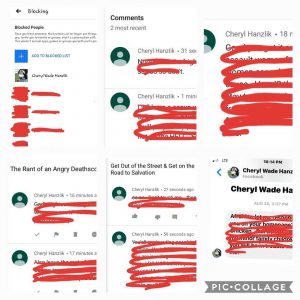 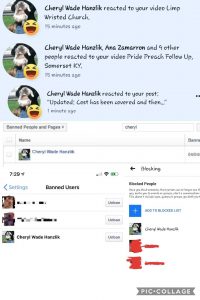 Hanzlik even goes as far as creating fake names after she has been made unable to make contact with those she wants to harass. Not understanding that the internet is a very sophisticated and technologically advance domain that has protocols in place to protect people from abusive predators like Cheryl Hanzlik, ChrisitianJournal was able to obtain this information and filter it out before Hanzlik could spew her hateful comments and threats.

Here, you can see how Hanzlik used the fake name of Cherry Hancluck, yet her email address as well as IP address was made available to unveil her deceptive attempt to make contact with Amanda Penkoski who previously blocked her from all alternative social media platforms.

On the abortion clinic “Kill Days”, (which are days when abortions are actually performed) outside of the Bristol Regional Women’s Center, the senior citizens can be seen, anxiously shuffling across the street to harass Pro-Life advocates, with a camera or those pink megaphones in hand. She often rambles on with out without the megaphone, a slew of bizarre songs and maddening babbling’s similar to the textbook delirium of someone who is suffering from Sundowners Syndrome. Other times Hanzlik can be observed screaming out phrases that she thinks are in the bible, seething out of the mouth with anger when Christians say they will pray for her, cursing out Christians and mocking the bible and those who believe in it. Though Hanzlik scatters away from the Pro-Life advocates when law enforcement arrives, she then goes on paranoid rants about imaginary conspiracies to harm her family, but nothing stops her from stammering back over after they leave.

No Christian or Pro-Life advocate endorses or condones the language coming from the man with the white megaphone in this next video, It is evident that he reacted poorly, however Hanzlik clearly attempted to harm him with her megaphone which caused him to react in self defense, both verbally and physically. The video shows Hanzlik attempting to shove her megaphone in the mans face which causes him to use his megaphone as a means of self defense by hitting Hanzlik’s megaphone to stop her. As the batteries from Hanzlik’s megaphone fall to the ground, Hanzlik attempts to go after the man again in an aggressive manner but is promptly stopped by another clinic escort, Denise Skeen, before her megaphone makes contact with the mans head. Soon after, you can see Skeen herself, smack the white megaphone then shove her body into the man whose head she just spared. Behind the man with the mega phone, his own wife can be seen attempting to kick the batteries from Hanzlik’s megaphone off the sidewalk. As the wife is trying to rid the batteries from the side walk, James Skeen, who is The Sullivan County Democratic Party Executive Committee person for District 1, husband of Denise, physically goes after the woman while she is kicking the batteries. Finally the man with the white megaphone can be seen shoving James Skeen away from his wife before he is able to assault her. Take note that James Skeen is nearly twice the weight and towers over a foot taller then this woman in height. It is clear to see that the man who shoved Skeen was acting appropriately when it came to preventing his wife from the physical assault that may have taken place if Skeen were not stopped.

In the second video below, you can see where Hanzlik is now attempting to assault the wife with her megaphone and blowing the siren in her face, which causes the woman to shove the megaphone away, more then once. Hanzlik then has the nerve to scream at the woman to stop touching her.

Many police reports have been filed against the clinic Deathscorts by many different Pro-Choice advocates. The Bristol police department as well as the Sullivan County District Attorney refuse to prosecute even though the patrol officers have seen first hand the violent nature of the Deathscorts, as well as many hours of video footage that has been provided to them both. The usual response from Bristol police departments patrol supervisor and the DA of declining to prosecute physical assault has not gone unnoticed by other media outlets.

Not to mention that the Deathscorts admit online that they are assaulting people. James Skeen publicly vows to teach a new prospective Deathscorts how to assault someone and even admits they will all lie and say it didn’t happen, while Carleen Claybaker, also a senior citizen deathscort, who was a nurse in her prime days, admits to threatening bodily harm to Pro-Life advocates.

Felon Convicted Of Conspiracy To Commit Murder Doubles As A Knife...