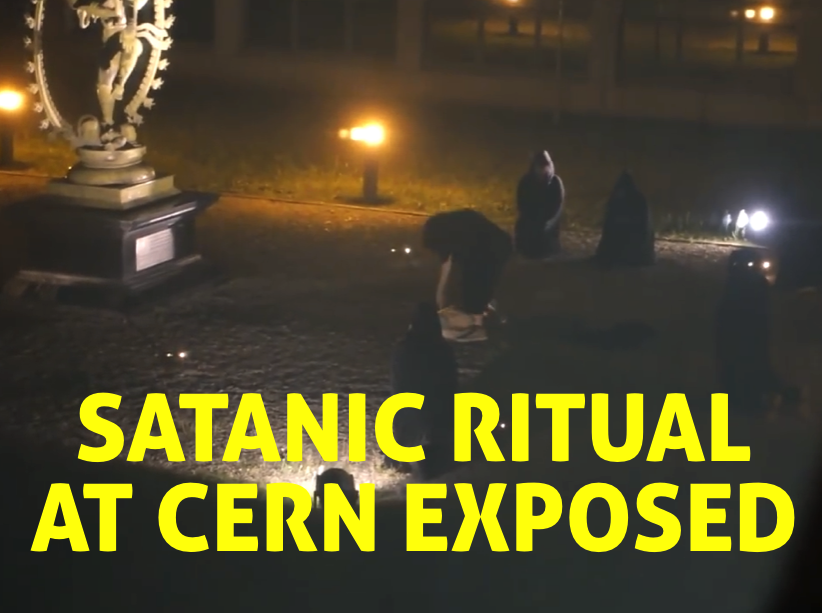 CERN, home of the Large Hadron Collider is potentially involved in satanic ritual practice. A very strange leaked video surfaced of a satanic ritual human sacrifice taking place on the grounds of CERN in front of the Shiva statue.

Ritual magic, are how the LHC is opening doors to other dimensions, claims the title of the video; when in reality it would take much more than one human sacrifice for the heads of CERN to open such portals.

As previously covered in FFT’s series CERN Darkness Falling, the energy harvested for the LHC is from that of human sacrifice. This particular video showcases evidence that would attest to that statement.

It is well beyond evident that CERN is involved in satanic practice, and now it is even more evident because depending on when this ritual took place. It would appear as though it coincides with a satanic ritual date, and that is important because timing is everything.

The Satanic Rituals for August are as follows:

Also around the same time was a Hindu ritual:

“The Nag Panchami (Devanagari: नाग पंचमी) is a traditional worship of snakes or serpents observed by Hindus throughout India ,Nepal and other countries where Hindu adherents live. The worship is offered on the fifth day of bright half of Lunar month of Shravan (July/August), according to the Hindu calendar.”

It just so happens that the Nag Panchami also coincides with the Satanic ritual dates regarding Lughnasadh; and Lughnasadh is a ritual that requires blood sacrifice. Being that the date of the footage is relatively unknown, it is most likely that the ritual took place for the Lughnasadh ritual.

So what is Lughnasadh?

Lughnasadh marks the beginning of the harvest, a time when satanic rituals are at an all time high. This ritual is a blood ritual, where they offer human and animal sacrifices to false gods.

Lughnasadh or Lammas is also the name used for one of the eight sabbats in the Neopagan Wheel of the Year. It is the first of the three autumn harvest festivals, the other two being the autumn equinox (also called Mabon) and Samhain. In the Northern Hemisphere it takes place around 1 August, while in the Southern Hemisphere it is celebrated around 1 February.

In the event that CERN releases an official statement claiming this to be a prank, it should be duly noted that CERN is at the very least reenacting satanic ritual sacrifice which only showcases what goes on in the shadows of CERN, how the LHC is truly powered, and their ultimate agenda – which is to bring about the full end times.

It is increasingly becoming painstakingly obvious what CERN and the LHC are truly up to; and this video showcases potentially more damning evidence to support the claim that the LHC and CERN should both be shut down.