The name of Jesus is under assault; Colorado Springs wants to remove an ad with ‘Jesus is Lord’ citing hate speech but in reality it is a violation of Christians’ first amendment rights.

Violating the rights of every American is one thing, but to systematically attack one faith the way the United States government has in recent years; showcases the events prescribed in the End of Days as the Bible states.

Christians in Colorado Springs, have just about lost their First Amendment Rights. The Charis Christian Center ran an ad which reads ‘Jesus is Lord’ for the past three years. But because of ONE single complaint from a resident; the city will potentially no longer allow the word ‘Jesus’ to be used in advertisements. The city claims it is because ‘Jesus’ invites hate messaging.

The move by the city is not about removing the entire advertisement. There is one blatant word which the city seeks to eliminate; Jesus. A steady yet alarming trend is taking place all over the world; the attack on Christians far and wide, with America leading the way. 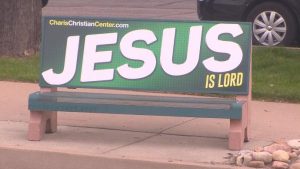 In a written statement, they said, “a recent citizen complaint about certain advertising on bus benches has caused City Transit staff to undertake careful review of both the advertising and Transit’s current advertising policy in relation to the requirements of the 1st Amendment’s Establishment Clause. The Establishment Clause prohibits the endorsement of a specific religion or its tenets. Transit is working with the Office of the City Attorney concerning the matter and Transit’s advertising policy going forward.”

Lawson said he was told there’s no problem if he uses the name of his church, just not the name Jesus.

The move could eventually disallow public use of the name, Jesus, because it is a public transit service. Which means anyone can advertise, but limiting a certain faith does violate the constitution because citizens have to practice the religion of their choice. The issue is so much greater than an advertisement because similar situations are happening all around the country.

RELATED: ALERT HILLARY CLINTON TO PROSECUTE THOSE WHO DENY CLIMATE CHANGE; ANOTHER ATTACK ON FREE SPEECH!

Lawson Perdue, the pastor of Charis Christian Center in Colorado Springs, states that he is ready to fight, and that a national law firm has agreed to take their case. Interestingly enough, if it turns out that the name of JESUS must be removed from the ad; where does it stop?

The general definition of public, is that it is open to anyone in the citizenry; but what will happen if they remove the name of Jesus from advertising?

What will happen if the city disallows this one advertisement to showcase the name of Jesus is the complete removal of speaking of Jesus publicly. How? Speaking of Jesus on the streets, online, or anywhere deemed public could potentially be viewed as advertising. A building with the name of Jesus will potentially get viewed as an advertisement as well. It never stops at just one case, because each case further determines how the law gets interpreted. This particular case has the ability to go on a national scale, and could potentially, eventually mean Christians far and wide lose their rights to speak of the name of Jesus Christ the Savior.

Is this all “ifs” and “maybes?” Absolutely not, every city has some sort of an incident where Christians are being disallowed their rights to either publicly preach, or to publicly display the name of Jesus because individuals are getting “offended.”

America is going rogue, dark, and will soon completely turn a blind eye to the creator; Christians of America it’s time to wake up and speak up because your government wants to silence you.